Welcome to your detailed guide for hostels in St David's, Wales. You can choose from 1 St David's hostels. In total, there are 1 cheap places to stay in St David's such as guesthouses and bnbs. Prices start from $9 for a dorm.

This section is dedicated to take away all your "I wish someone had told me that before I went!" experiences. This way, you are better prepared for what to expect, what not to expect and can spend less time settling in, and more time making new friends in your chosen hostel. We share our insider knowledge of tips, tricks and important things to look out for in St David's. To help you make friends with St David's before you visit, we've included a few helpful and fun things you should know about the area. Enjoy!

Guess what? St David's is also named and spelled St Davids - It is the same destination. Goodbye confusion. 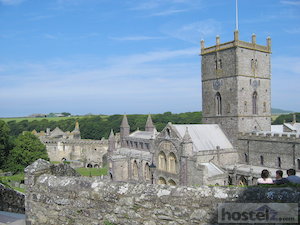 St. David's is the smallest city in the UK, but it is by no means lacking in things to do or see, so it's worth getting a hostel here.

The hostels around St. David's tend to be outside of the city, but there is a shuttle bus that runs frequently along the coast that is a hail-and-ride service, so you can hop on and off wherever you need to be. The closest train station is in Haverfordwest, but Richards Brothers Bus does a fairly frequent service into St. David's.

Within the city itself, there is St. David's Cathedral, which is not as large or intimidating as other cathedrals you will often find, but the painted, wooden ceiling sets a warm and magnificent tone. There are several shops selling local wares, plenty of cafes and pubs, and a grocery store (but for cheaper food go to the Aldi in Haverfordwest).

Like many places along the Pembrokeshire Coast, St. David's is ideal for the outdoor adventurer. The Pembrokeshire Coast Trail boasts spectacular views along a beautiful trail, and there is a shuttle bus that runs the length of the trail along the coast. While the city itself is not situated directly on the coast, there are plenty of trails that lead to the coast. Whitesands Bay is a hotspot for beach-goers, and you can go kayaking, surfing, and coasteering along the water.

Head out on a ferry to Ramsey Island and check out the puffins and other birds if you're in need of a day trip. St. Justinian's is also a nice place to hike out to for the day. Keep an eye for wildlife -- there are plenty of birds and marine mammals to be spotted along the coast trails, and be sure to bring your windbreaker because it's always quite windy in that part of Wales!

There are plenty of frequently asked questions about hostels in St David's. We've collected the most common questions and doubts when it comes to picking your preferred accommodation in St David's. The more you know, the better you can plan with confidence and ease, right?

How to find hostels in St David's?

There is exactly 1 Hostel in St David's, Wales. Hostelz.com compares the prices for this hostel so you can get the best price on any major booking site.

What is the best way to find cheap accommodation in St David's?

This makes this very website the best place to find cheap accommodation in St David's.

Travel Tips for St David's - from the Community

Oh man, so far no one from the community has left a comment or travel tips for St David's. How about you kick start the discussion here? Gather your best backpacking recommendations for St David's and jot them down below. The community thanks you.

Hostel? Check! Now let's have at your hostel packing list for St David's and Wales.