Hostels and Cheap Places to stay in Konya, Turkey

There is no hostels in Konya listed. We list for you other cheap places to stay in Konya, Turkey.
We compare all hostel prices in Konya for you. So you save money and time!

This section is dedicated to take away all your "I wish someone had told me that before I went!" experiences. This way, you are better prepared for what to expect, what not to expect and can spend less time settling in, and more time making new friends in your chosen hostel. We share our insider knowledge of tips, tricks and important things to look out for in Konya. To help you make friends with Konya before you visit, we've included a few helpful and fun things you should know about the area. Enjoy! 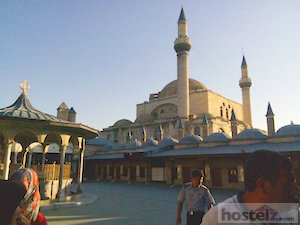 Konya is the city of love, a city from where the message of love spread to world in the thirteenth century by the great Sufi of that time, Mevlana Jalal ud Din Rumi. Located in the central Anatolian region of Turkey, this city has been the capital of Saljuq Sultanate of Rum. Today Konya is the seventh-most populous city in Turkey, an industrial and economical hub for the country and also the capital of the province of Konya.

The city, as the capital of then Saljuq Sultanate of Rum, already had its importance and name in the world, but today it is known not as the capital of the Sultanate of Rum but as the place of Mevlana Jalal ud Din Rumi, who migrated to Konya in the early thirteenth century and lived and died there. Mevlana, who was a scholar and used to teach in the university which he had established in Konya, eventually left teaching and everything else in life after he lost his friend and teacher Shams of Tabriz, who was his spiritual inspiration. Mevlana danced in the streets of Konya in search of his friend and today this dance of the "Whirling Dervish" is a renowned symbol of Konya and Turkey. Millions of his followers known as Whirling Dervishes come to Konya throughout the year and whirl around his tomb to pay him respect. Lovers come to his tomb to promise to be a lover like him.

Beside the tomb of Rumi, other places of interest in the city include Selimiye Mosque, Alaeddin Mosque, and Ince Minaret Medrese (the university established by Mevlana). There are many Konya hostels, but all of the hostels in Konya might not be available online; once in the city, you can find plenty of Konya hostels and hotels, which can be booked on the spot.

Hostel? Check! Now let's have at your hostel packing list for Konya and Turkey.

Travel Tips for Konya - from the Community

Travel Tips for Konya - from the Community

Oh man, so far no one from the community has left a comment or travel tips for Konya. How about you kick start the discussion here? Gather your best backpacking recommendations for Konya and jot them down below. The community thanks you.