Welcome to your detailed guide for hostels in Eskisehir, Turkey. You can choose from 1 Eskisehir hostels. In total, there are 5 cheap places to stay in Eskisehir such as guesthouses and bnbs. Prices start from $7 for a dorm.

This section is dedicated to take away all your "I wish someone had told me that before I went!" experiences. This way, you are better prepared for what to expect, what not to expect and can spend less time settling in, and more time making new friends in your chosen hostel. We share our insider knowledge of tips, tricks and important things to look out for in Eskisehir. To help you make friends with Eskisehir before you visit, we've included a few helpful and fun things you should know about the area. Enjoy! 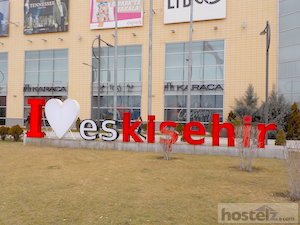 Eskisehir, Turkey, is an alternative stop if you plan to visit Istanbul, Izmir, and/or Ankara. It is just three hundred kilometers from Istanbul, four hundred fifty kilometers from Izmir, and two hundred fifty kilometers from Ankara. You will have to make a small detour, but you will not regret visiting Eskisehir and it will be a great gem in any Turkish tour. Another advantage to visiting this area is that Eskisehir is virtually not known to foreign tourists and you can feel the authentic Turkish spirit in one of the friendliest cities in Turkey. Nevertheless, many Turks consider Eskisehir one of the loveliest cities in Turkey, and not without good reason, as the city is very vibrant with many young people.

In contrast, Eskisehir in Turkish means Old (eski) City (sehir). And historians estimate the city to be older than four thousand years. Eskisehir has not preserved many historical buildings, but you can visit the Kurşunlu Cami Mosque, the Museum of Glassware Arts, and others. Also, Dorylaeum, an ancient Phrygian city, is only a few kilometers from Eskisehir and you can spend an afternoon there. A good local souvenir is a meerschaum pipe, as the city is a major producer of meerschaum (a clay-like material).

There are not many hostels in Eskisehir, as there are not so many foreigners visiting the city. However, the few Eskisehir hostels operate all year long; have great central location; low to moderate prices; and last but not least, friendly staff. As it could be expected, not all people working in hostels in Eskisehir know perfect English, so be ready to improvise -- people are friendly and helpful, so do not be ashamed to be articulate. Also, some hostels in Eskisehir offer a Turkish breakfast and travelers can take advantage of that. Also, be sure to taste Turkish coffee and “lokum” (a sweet confectionary treat known as Turkish Delight). It is definitely a nice city to visit for a day or two.

There are plenty of frequently asked questions about hostels in Eskisehir. We've collected the most common questions and doubts when it comes to picking your preferred accommodation in Eskisehir. The more you know, the better you can plan with confidence and ease, right?

How much are hostels in Eskisehir?

How to find hostels in Eskisehir?

There is exactly 1 Hostel in Eskisehir, Turkey. Hostelz.com compares the prices for this hostel so you can get the best price on any major booking site.

Which hostels in Eskisehir are good for families?

Deeps Hostel Eskişehir is the best hostel in Eskisehir for families.

What is the best way to find cheap accommodation in Eskisehir?

Hostelz.com compares prices for 1 hostel in Eskisehir, Turkey. We list for you other cheap places to stay in Eskisehir such as

This makes this very website the best place to find cheap accommodation in Eskisehir.

Travel Tips for Eskisehir - from the Community

Oh man, so far no one from the community has left a comment or travel tips for Eskisehir. How about you kick start the discussion here? Gather your best backpacking recommendations for Eskisehir and jot them down below. The community thanks you.

Hostel? Check! Now let's have at your hostel packing list for Eskisehir and Turkey.