Welcome to your detailed guide for hostels in Swellendam, South Africa. You can choose from 1 Swellendam hostels. In total, there are 2 cheap places to stay in Swellendam such as guesthouses and bnbs. Prices start from $9 for a dorm.

This section is dedicated to take away all your "I wish someone had told me that before I went!" experiences. This way, you are better prepared for what to expect, what not to expect and can spend less time settling in, and more time making new friends in your chosen hostel. We share our insider knowledge of tips, tricks and important things to look out for in Swellendam. To help you make friends with Swellendam before you visit, we've included a few helpful and fun things you should know about the area. Enjoy! 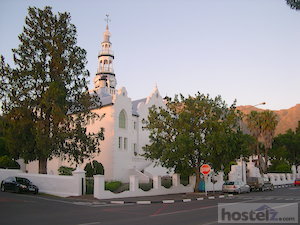 Swellendam, South Africa, is located around two hundred twenty kilometers east of Cape Town, and two hundred ten kilometers west of George on the N2 highway. It is one of the oldest towns in South Africa and is a great stopover for travelers taking the Garden Route. In fact, Swellendam and the surrounding towns of Barrydale, Buffeljags, Suurbraak, Stormsvlei, and Malgas are known as the Cape Trade Route.

Swellendam is noted for its nineteenth-century Cape Dutch Architecture. The Drostdy Museum is well worth a visit for the collection of buildings, which are the oldest in Swellendam. These include examples from the late eighteenth century, including the magistrate's house and the old jail.

For nature lovers, Swellendam is also a base for visits and hikes in Marloth Nature Reserve, Sanbona Wildlife Reserve, and Bontebok National Park. Bontebok National Park is the smallest of South Africa's national parks and is dedicated to the preservation of the endangered Bontebok antelope. From a population of just seventeen individuals in the early twentieth century, there are now around three thousand throughout the world, and two hundred of them are in this park. Marloth Nature Reserve offers a network of hiking trails, ranging from two two-kilometer trails of a little over an hour to two-day and five-day trails. The area is also home to more than two hundred recorded bird species.

Accommodation in the area is well established, with a number of guesthouses in the town itself. For backpackers looking for Swellendam, South Africa hostel dorm beds, there are limited options in Swellendam. Budget hostels in the area with cheap dorm accommodation can be found in the town of Barrydale, forty-five kilometers northeast of town, and there are more hostel choices in Montagu, fifty kilometers northwest of Swellendam. All the hostels in Swellendam, South Africa and the surrounding area are convenient for vehicle owners, but those using public transport will have to negotiate the minibus taxi routes between the towns.

For those travelers with their own transport and who want to stay a few days in the area, Witsand is only about sixty kilometers south of Swellendam and offers a lovely beach and some of the best whale-watching in South Africa. There is also hostel dorm accommodation in Witsand.

There are plenty of frequently asked questions about hostels in Swellendam. We've collected the most common questions and doubts when it comes to picking your preferred accommodation in Swellendam. The more you know, the better you can plan with confidence and ease, right?

How to find hostels in Swellendam?

There is exactly 1 Hostel in Swellendam, South Africa. Hostelz.com compares the prices for this hostel so you can get the best price on any major booking site.

What is the best way to find cheap accommodation in Swellendam?

Hostelz.com compares prices for 1 hostel in Swellendam, South Africa. We list for you other cheap places to stay in Swellendam such as

This makes this very website the best place to find cheap accommodation in Swellendam.

Travel Tips for Swellendam - from the Community

Oh man, so far no one from the community has left a comment or travel tips for Swellendam. How about you kick start the discussion here? Gather your best backpacking recommendations for Swellendam and jot them down below. The community thanks you.

Hostel? Check! Now let's have at your hostel packing list for Swellendam and South Africa.