This section is dedicated to take away all your "I wish someone had told me that before I went!" experiences. This way, you can spend less time settling in, and more time making new friends in your chosen hostel. We share our insider knowledge of tips, tricks and important things to look out for in Veliky Novgorod.

Guess what? Veliky Novgorod is also named and spelled Veliki Nóvgorod - It is the same destination. Goodbye confusion. 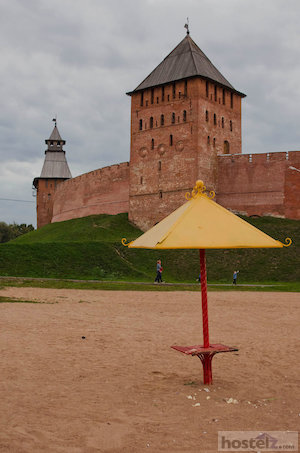 Veliky Novgorod (Veliki Nóvgorod), Russia, is of a historic importance for the whole Russia -- Novgorod was one of the main stops on the trade route from the Varangians to the Greeks and remained the second-most important city after Kiev during the times of Kievan Rus'.

You can get to Novgorod by train or by bus. The bus station is located near the train station in Novgorod. It would take you about three hours to go to Novgorod from Saint Petersburg by train. Novgorod is situated on the federal highway from Moscow to Saint Petersburg so it can be reached by car too.

Most of the tourists come to Novgorod to visit the Novgorod Kremlin (also known as the Detinets), St. Sophia Cathedral (one of the main Russian churches, which was built in the eleventh century, and has survived many troubles of city life, including Nazi occupation of Novgorod during World War II), the monument "Millennium of Russia" and Yaroslav's Court with its multiple churches.

Novgorod's public transportation system includes buses, trolleybuses, and mini buses called marshrutkas. Some distant areas of the city can be reached by train and at summer time by boat.

The city center presents very green and peaceful areas with low-rise buildings. Wooden cottages occasionally look like the house of Russian witch Baba Yaga. You will find many allusions to Russian fairytales in Novgorod. For example, on the right side of the River Volkhov, locals would go for a quick meal to a cafe Kolobok named after Russian fairytale hero. You can try tasty traditional pies and cakes and Russian soups there.

Novgorod is a very peaceful city; some buildings are reminiscent of Russian dachas. You can occasionally meet a cow or a horse chewing the grass at a city lawn. At summer, besides walking within the Kremlin walls, you can rent a bicycle and try one of the city bikeways or take a cruise around the River Volkhov. At any season on the streets of Novgorod you can meet a stray cat or a dog.

In autumn, the whole city celebrates the Savior of the Apple Feast Day, and you can eat apples right from the trees in the city parks.

In winter, it can get really snowy in Novgorod, and you can try a traditional Russian childish sport and slide down an icy chute or go skiing by the river. As spring arrives, you can participate in a farewell to winter, eat pancakes during the week of Shrovetide, and see the bonfire burning to ashes the scarecrow of the cold time of the year.

This makes this very website the best place to find cheap accommodation in Veliky Novgorod.

Above we list every single hostel there is in the city. Let us take a broader look at what you can expect - and what not. We created this cheatsheet for you to get a more complete picture of the hostel quality in Veliky Novgorod, average prices and types of hostels to choose from.
1 Total number of hostels

Travel Tips for Veliky Novgorod - from the Community

Travel Tips for Veliky Novgorod - from the Community