Welcome to your detailed guide for hostels in Palawan, Philippines. You can choose from 0 Palawan hostels. In total, there are 1 cheap places to stay in Palawan such as guesthouses and bnbs. Prices start from $9 for a dorm.

This section is dedicated to take away all your "I wish someone had told me that before I went!" experiences. This way, you are better prepared for what to expect, what not to expect and can spend less time settling in, and more time making new friends in your chosen hostel. We share our insider knowledge of tips, tricks and important things to look out for in Palawan. To help you make friends with Palawan before you visit, we've included a few helpful and fun things you should know about the area. Enjoy! 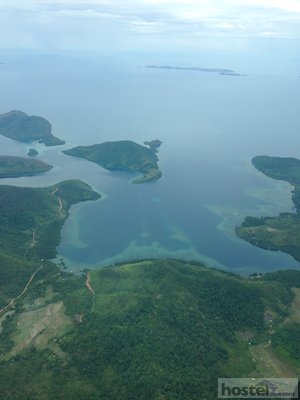 Palawan is an astonishing island in the southwest of the Philippines, said to be the Philippines' last frontier! It's usually without the crowds of the Visayas archipelago, and this island has plenty of interesting and amazing places, and it is a must-see. Really good beaches, lagoons, underground rivers with caves and pools, and limestone cliffs in the clear waters are some of the best to enjoy in Palawan.

Actually, Palawan has around just under two thousand islands and islets, many of them surrounded by lively and protected coral reefs bustling with marine life, so as you can imagine, this is an amazing place for divers –- but always keep in mind the importance of not touching anything underwater. Take a camera with you -- photos are the best souvenir you can take home, not parts of the coral. For extra fun, in Coron you will find find some sunken Japanese World War II ships -- try these wreck dives. You won't regret it! If you don't dive, the stunning seascapes and jagged limestone islands in the Bacuit archipelago are more than worth the trip.

The best areas to explore are in the north of the island, starting from Puerto Princesa, the provincial capital with a crescent environmental friendly tourism. North of the city, Port Barton and El Nido are also good bases to explore the surroundings.

The best way to arrive in Palawan is by airplane, with Puerto Princesa Airport being the main one. There are a few ferries connecting Puerto Princesa, El Nido, and Coron to Cebu and Manila, but you can expect almost twenty-four hours traveling, and during the monsoons it can be quite scary.

There are a few hostels in Palawan and you can expect the perfect, laid-back atmosphere and friendly staff everywhere. Even though, prepare yourself for some particularities -- Palawan's hostels, like every house in the island, have limited use of electricity, so many times, you will only have candles after 10 p.m.

Travel Tips for Palawan - from the Community

Hey fam! Here are a few more tips from the community, from them to you, and you to them. This space is dedicated for travellers to share their best tips on backpacking Palawan. Have a closer look - the Hostelz community share real hidden gems, insider knowledge and overall impressions of Palawan. Everyone is welcome to add something useful, funny, unexpected and the "absolutely necessary to know before you go" - share, share and then share a little more!

Palawan has the most beautiful white sand beach in the world. The pristine beauty of this place is unsurpassed. It is heaven on earth for those who love exploring the beauty of nature.

Hostel? Check! Now let's have at your hostel packing list for Palawan and Philippines.