Welcome to your detailed guide for hostels in Legazpi, Philippines. You can choose from 0 Legazpi hostels. In total, there are 2 cheap places to stay in Legazpi such as guesthouses and bnbs. Prices start from $9 for a dorm.

This section is dedicated to take away all your "I wish someone had told me that before I went!" experiences. This way, you are better prepared for what to expect, what not to expect and can spend less time settling in, and more time making new friends in your chosen hostel. We share our insider knowledge of tips, tricks and important things to look out for in Legazpi. To help you make friends with Legazpi before you visit, we've included a few helpful and fun things you should know about the area. Enjoy!

Guess what? Legazpi is also named and spelled Legaspi - It is the same destination. Goodbye confusion. 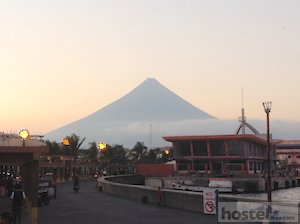 Legazpi City, Philippines is home to the iconic Mount Mayon, an almost-perfect, spherical active volcano that rises above the city and port. Once a simple fishing village set in the mangroves that was discovered by a Spanish expedition in the late sixteenth century, Legazpi is known as the "City of Fun" and the gateway to the Bicol region.

As it's served by an airport and a port, Legazpi is a very accessible city. Getting to Legazpi is very easy by air, as it's served by three different airlines. It is only a one-hour flight via Manila, and it's also a great jumping-off point to the many islands of the Philippines. There is also overnight bus service with Philtranco and a few others that takes roughly ten or more hours if you are counting your pesos.

Many people come to Legazpi for an encounter with the whale sharks in Donsol, but the city and surrounding area plenty to offer. If you are into adventure, take a quad-bike tour of the active volcano, or a challenging climb on its steep slopes. If you want to stick closer to the city, the Embarcadero along the port has plenty to offer in the way of zip-lining, go-karts, jet skis, skim-boarding, and much more. If you feel like getting back to nature, Legazpi has half a dozen various parks including Albay Park and Wildlife, combing a great place to picnic and a zoological park. After all that fun, if you are in need of pampering, take your pick from one of the many fabulous spas, and then head out to enjoy some delicious Bikol cuisine from one of the many restaurants in the area, then continue on to a nightclub for music and dancing.

Legazpi also has many festivals and saints fiestas throughout the year -- in April, the Daragang Magayon Festival spans the whole month celebrating Mount Mayon. Every week around Easter focuses on Holy Week. December ushers in the Karangahan Green Christmas Festival, which extends through the month and offers bazaars, food festivals, and traditional dancing.

Travel Tips for Legazpi - from the Community

Oh man, so far no one from the community has left a comment or travel tips for Legazpi. How about you kick start the discussion here? Gather your best backpacking recommendations for Legazpi and jot them down below. The community thanks you.

Hostel? Check! Now let's have at your hostel packing list for Legazpi and Philippines.