Welcome to your detailed guide for hostels in Huanchaco, Peru. You can choose from 11 Huanchaco hostels. In total, there are 14 cheap places to stay in Huanchaco such as guesthouses and bnbs. Prices start from $9 for a dorm.

Above we list every single hostel there is in the city. Let us take a broader look at what you can expect - and what not. We created this cheatsheet for you to get a more complete picture of the hostel quality in Huanchaco, average prices and types of hostels to choose from.

Hostels in Huanchaco for all Traveller Types

Travelling on your own to Huanchaco? Fabulous!

Pick a great hostel designed with solo travellers in mind, and you're bound to meet plenty of like-minded people who have also dared to venture to Huanchaco alone. Here are the top hostels for solo travellers in Huanchaco. We've also highlighted which hostel offers special perks you, as a solo traveller, will love. Each hostel offers great social spaces to meet fellow backpackers and wonderful opportunities for making new friends. You'll soon realise that travelling on your own definitely does not mean travelling alone.

This section is dedicated to take away all your "I wish someone had told me that before I went!" experiences. This way, you are better prepared for what to expect, what not to expect and can spend less time settling in, and more time making new friends in your chosen hostel. We share our insider knowledge of tips, tricks and important things to look out for in Huanchaco. To help you make friends with Huanchaco before you visit, we've included a few helpful and fun things you should know about the area. Enjoy! 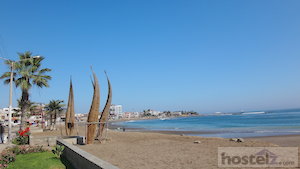 Traveling to the south, in Trujillo, capital of the La Libertad province, is the Huanchaco beach. The area is known for the use of the Totora horses, inherited from the Moche culture, preceding the Inca. These boats, made from reeds, made fishing easier for the natives and are currently used for sporting tasks as a surf.

The area preserves tradition and deploys boats along the beach, representative of the place.

The town offers great tranquility to its visitors, as well as the view from its wooden pier built in the early twentieth century. Among the many attributions to the Peruvian cultural life of the Moche culture, it is said that it was in this area that ceviche, one of the most famous dishes of the country's gastronomy, originated.

It is also possible to visit archaeological sites where you can appreciate the splendor of various ancient cultures that settled in the area and that left indelible marks on Peruvian culture.

The ruins of Chan-Chan, the Huacas of the Sun and the Moon, of the Rainbow and in the neighboring province of Lambayeque the Tomb of the Lord of Sipán are some.

The historic center of Trujillo is an architectural gem full of cultural history from across the country. Simón Bolivar and César Vallejo are some of the great figures who made history in this city.

The sociocultural reality of the region is a display of indigenous cultural diversity influenced by crossbreeding with western European culture, Andean, Amazonian and Afro-Peruvian peoples. Dozens of ethnicities, languages, music and dance show the union that shapes the Peruvian identity.

The best hostel in Huanchaco is easily ATMA Hostel & Yoga.

Huanchaco has the usual tourist facilities you would expect in an established resort - bars, restaurants (mainly seafood), take-away, shops, a lively produce market, bank machines, a crafts market at the southern end, and a long strip of beach.

The main draw for travelers staying at Huanchaco hostels is surfing - it has excellent breaks if the wind and time of year are right. Outside of the peak surfing season (December to April), beginners will find things a bit easier and less crowded. Many places offer board hire and lessons but it's wise to ask around for recommendations. Nights can be lively in the town and some places have very cheap cocktail nights, which are very popular. Out of season things quieten down markedly just as the waves do.

Transport connections to and from your Huanchaco hostel are good and there are always buses heading along the beach road and on to Trujillo for transport connections to the rest of Peru or north to Ecuador. This is a very relaxing place with friendly locals and a good choice for a stop on your pan-American odyssey.

There are plenty of frequently asked questions about hostels in Huanchaco. We've collected the most common questions and doubts when it comes to picking your preferred accommodation in Huanchaco. The more you know, the better you can plan with confidence and ease, right?

How to find hostels in Huanchaco?

Hostelz.com shows all 11 Hostels in Huanchaco. Simply filter by neighborhood and price to find your perfect budget place to stay.

Which hostels in Huanchaco are good for families?

Indigan Surf Hostal is the best hostel in Huanchaco for families.

What are the coolest hostels in Huanchaco for female solo travellers?

What is the best way to find cheap accommodation in Huanchaco?

Hostelz.com compares prices for 11 hostels in Huanchaco, Peru. We list for you other cheap places to stay in Huanchaco such as

This makes this very website the best place to find cheap accommodation in Huanchaco.

What are the best party hostels in Huanchaco?

Travel Tips for Huanchaco - from the Community

Oh man, so far no one from the community has left a comment or travel tips for Huanchaco. How about you kick start the discussion here? Gather your best backpacking recommendations for Huanchaco and jot them down below. The community thanks you.

Hostel? Check! Now let's have at your hostel packing list for Huanchaco and Peru.