1 Hostel in Timbuktu available. Prices start from $9 for a dorm bed.
We compare all hostel prices in Timbuktu for you. So you save money and time!

This section is dedicated to take away all your "I wish someone had told me that before I went!" experiences. This way, you can spend less time settling in, and more time making new friends in your chosen hostel. We share our insider knowledge of tips, tricks and important things to look out for in Timbuktu. 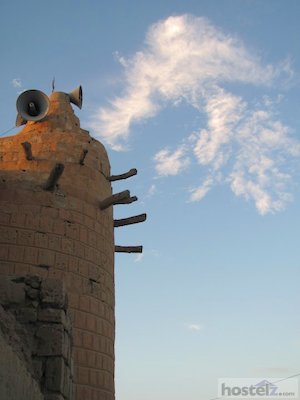 Is there a place on Earth that has a name so charged with mystery as Timbuktu, Mali? Timbuktu -- the name of which is synonymous with being in the middle of nowhere -- is right on the edge of the Sahara Desert. Indeed, the city is in constant danger of being invaded by the Saharan sands, which blow through the city.

A UNESCO World Heritage Site, Timbuktu is steeped in ancient history. Sadly, much of this was destroyed in recent years when the city was occupied by Ansar Dine, a militant Islamic Taureg rebel group with suspected affiliations to Al-Qaeda, but there's still plenty to see here.

Located a thousand kilometers northeast of the capital Bamako, Timbuktu is accessed by public transport from Mopti, a small city four hundred kilometers south. The six-to-eight-hour journey is a very interesting ride along barely visible desert tracks and a crossing of the River Niger by ferry. This river provides the only water to which Timbuktu has access in a sea of sand.

Founded in the fifth century, Timbuktu became an important center of Islamic study and worship in the thirteenth century. It was initially a trading post for the salt caravans that traversed the Sahara to exchange their salt for gold, ivory, and slaves. Even now, the occasional long train of camels can still be seen entering Timbuktu after days of walking across the Sahara. A camel market is still held in the northern edge of town.

The old mosques, mausoleums, and libraries are the reason tourists come to Timbuktu. Despite the destruction by Ansar Dine, most of the ancient manuscripts in the many private family libraries in the town were smuggled out at great risk to the locals. Most of these are now in Bamako, awaiting their return to Timbuktu, but many were secreted in the family houses and can be seen today. Many of the tombs were destroyed by the Islamists during their occupation of Timbuktu, because they were considered examples of idolatry, a sin in Islam.

The three ancient mosques of Djingareyber, Sankore, and Sidi Yahia were built between the fourteenth and sixteenth centuries and are the major attractions in Timbuktu for visitors.

Before the recent occupation, there were a couple of hostels in Timbuktu, Mali. The situation may have changed, so it's worth planning ahead if you want to stay in a Timbuktu, Mali hostel. Existing hostels in Timbuktu, Mali, will be on the edge of town, where it disappears into the desert, rather than in the center, but Timbuktu is a small town, so it's easy to walk into the center in fifteen minutes. Assess the situation before you visit Timbuktu, because its remoteness means that it is susceptible to regional and tribal disturbances.

We've collected the most common questions for hostels in Timbuktu. The more you know, the better you can plan with confidence and ease, right?

This makes Hostelz.com the best place to find cheap accommodation in Timbuktu.

Above we list every single hostel there is in the city. Let us take a broader look at what you can expect - and what not. We created this cheatsheet for you to get a more complete picture of the hostel quality in Timbuktu, average prices and types of hostels to choose from.
1 Total number of hostels

Travel Tips for Timbuktu - from the Community

Travel Tips for Timbuktu - from the Community

Oh man, so far no one from the community has left a comment or travel tips for Timbuktu. How about you kick start the discussion here? Gather your best backpacking recommendations for Timbuktu and jot them down below. The community thanks you.