Welcome to your detailed guide for hostels in Segou, Mali. You can choose from 1 Segou hostels. In total, there are 1 cheap places to stay in Segou such as guesthouses and bnbs. Prices start from $9 for a dorm.

This section is dedicated to take away all your "I wish someone had told me that before I went!" experiences. This way, you are better prepared for what to expect, what not to expect and can spend less time settling in, and more time making new friends in your chosen hostel. We share our insider knowledge of tips, tricks and important things to look out for in Segou. To help you make friends with Segou before you visit, we've included a few helpful and fun things you should know about the area. Enjoy! 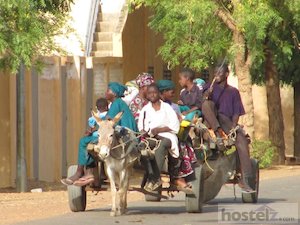 Segou, Mali, lies just under two hundred fifty kilometers northeast of Bamako, on the banks of the Niger River, on the long journey to Mopti along the RN6. It is the capital of Segou Region. in the seventeenth century when the Bambara migrated from Djenne, the Bambara kingdom's capital was founded at Segou-Koro, ten kilometers from Segou.

Segou is a melting pot of the different ethnic groups that make up Mali. Bambara, Fula, Malinke, Soninke, Bozo, and Toucouleur are all represented here. Each group has its speciality or niche in Malian society. The Bozos are mostly fishermen and river travelers, the Bambaras are usually farmers, and the Soninke are merchants.

There is always a hustle and bustle on the banks of the river especially around the market, which sprawls along the water's edge. Here is where you can find huge collections of pottery for sale. Pottery is a craft particularly associated with the Segou region. Monday is the big market day, with boats overloaded with people and goods, fighting for space on the river. Although most travelers push straight on to Mopti, four hundred kilometers further northeast, Segou is well worth a stopover, particularly on market day Monday. There are a few old French Colonial buildings still standing as well and the streets are filled with donkey carts. It's a charming town.

Segou offers the budget traveler a choice of accommodation, including options for a hostel in Segou, Mali, that has dorm beds. Your Segou, Mali hostel is found on the edge of town away from the bustling market; it's very basic, but serves its purpose of cheap beds with no frills. Your Segou, Mali hostel also offers food, but it's fun to eat out in the town with the locals, where you'll no doubt attract a lot of attention, as few Western travelers stop here.

There isn't a lot to do and see in Segou, but it gives the curious traveler an insight into Malian daily life outside of the more touristic towns. It's a fairly quiet place, except for on Mondays, and is very pleasant to walk around and maybe take one of the public boats along the Niger River to a few of the more isolated villages.

There are plenty of frequently asked questions about hostels in Segou. We've collected the most common questions and doubts when it comes to picking your preferred accommodation in Segou. The more you know, the better you can plan with confidence and ease, right?

How to find hostels in Segou?

There is exactly 1 Hostel in Segou, Mali. Hostelz.com compares the prices for this hostel so you can get the best price on any major booking site.

What is the best way to find cheap accommodation in Segou?

This makes this very website the best place to find cheap accommodation in Segou.

Travel Tips for Segou - from the Community

Hey fam! Here are a few more tips from the community, from them to you, and you to them. This space is dedicated for travellers to share their best tips on backpacking Segou. Have a closer look - the Hostelz community share real hidden gems, insider knowledge and overall impressions of Segou. Everyone is welcome to add something useful, funny, unexpected and the "absolutely necessary to know before you go" - share, share and then share a little more!

I love Segou and would return in a minute! Recommend Le Djoliba for food and rest and the trip on the Niger to the villiage that produces the traditional pottery! You will never match it or forget it!

Hostel? Check! Now let's have at your hostel packing list for Segou and Mali.