37 hostels available. Prices start from $5 for a dorm bed.
We compare all hostel prices in Kuala Lumpur for you. So you save money and time!

This section is dedicated to take away all your "I wish someone had told me that before I went!" experiences. This way, you can spend less time settling in, and more time making new friends in your chosen hostel. We share our insider knowledge of tips, tricks and important things to look out for in Kuala Lumpur. 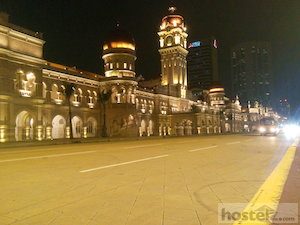 Kuala Lumpur is a federal territory consisting of the city of Kuala Lumpur and the suburbs like Kepong, Bukit Bintang, Batu, etc. The city of Kuala Lumpur used to be the seat of the government until 1999 when almost all the executive offices were moved to nearby Putrajaya, which is now widely considered as part of “greater” Kuala Lumpur. Kuala Lumpur is the largest and fastest growing Malaysian region in terms of infrastructure, economy, and population. It is located in the central west coast of mainland (Peninsular) Malaysia and connected to the world by Kuala Lumpur International Airport (KLIA), one of the busiest airports in Southeast Asia. The population of the city is mostly divided into Malays, Indians, Chinese, and other nationalities and therefore the city has influence of all and particularly these three main cultures.

Kuala Lumpur Sentral is the heart of Kuala Lumpur. It's connected to KLIA airport and to all other important regions of the city by rapid rail, rapid KL, KLIA Ekspress, and Komuter trains. KLCC is the Kuala Lumpur city center and within walking distance to almost all important shopping malls, restaurants, and tourist spots. Terminal Bersepadu Selatan (TBS) is the state of the art bus terminal connected to all over Malaysia by trains and buses, both inter and intra city.

Most interesting and must to visit place in Kuala Lumpur is no doubt the Petronas twin towers. Built in 1998, these towers were the tallest buildings in the world until 2004. Jalan Petalang is the famous street with almost everything being sold, mostly by Chinese at the cheapest price compared to rest of the city. Other famous places to visit are Kuala Lumpur (KL) tower, Jamek mosque, China town, Little India, Kuan Yin temple, Merdeka square, Aquaria KLCC, Masjid Negara, National Stadium of Malaysia, KL city park, Guandi temple, KL bird park, St. John’s Cathedral, and Sri Mahamariamman Temple. Batu Caves in the north of the city is an interesting place to witness the gods and religious practices of Hinduism.

Being one of the famous and most friendly tourist spots in the world, Malaysia in general and Kuala Lumpur in particular is a heaven for tourists and travelers. From world class hotels to low cost backpack hostels, everything is abundant. It is not only quite easy to find a hostel in Kuala Lumpur either online or in the streets of Kuala Lumpur, it is also quite cheaper to live in these hostels. Public and government both are tourist friendly and a tourist is always greeted with a smile. That’s what makes Kuala Lumpur, or generally speaking Malaysia, a place worth visiting.

We've collected the most common questions for hostels in Kuala Lumpur. The more you know, the better you can plan with confidence and ease, right?

This makes Hostelz.com the best place to find cheap accommodation in Kuala Lumpur.

Above we list every single hostel there is in the city. Let us take a broader look at what you can expect - and what not. We created this cheatsheet for you to get a more complete picture of the hostel quality in Kuala Lumpur, average prices and types of hostels to choose from.
37 Total number of hostels
$11 Average dorm price
$24 Average private room price
$6 Cheapest hostel in Kuala Lumpur
SHA LA LA is the cheapest
3 Party hostels in Kuala Lumpur
Sunshine Bedz Kuala Lumpur is the best rated
Most Kuala Lumpur hostels are located in
Bukit Kewangan, Bukit Bintang, Central
5.4 Average rating of all hostels

Travel Tips for Kuala Lumpur - from the Community

Travel Tips for Kuala Lumpur - from the Community

Hey fam! Here are a few more tips from the community, from them to you, and you to them. This space is dedicated for travellers to share their best tips on backpacking Kuala Lumpur. Have a closer look - the Hostelz community share real hidden gems, insider knowledge and overall impressions of Kuala Lumpur. Everyone is welcome to add something useful, funny, unexpected and the "absolutely necessary to know before you go" - share, share and then share a little more!