1 Hostel in Liwonde available. Prices start from $9 for a :roomType.
We compare all hostel prices in Liwonde for you. So you save money and time!

This section is dedicated to take away all your "I wish someone had told me that before I went!" experiences. This way, you are better prepared for what to expect, what not to expect and can spend less time settling in, and more time making new friends in your chosen hostel. We share our insider knowledge of tips, tricks and important things to look out for in Liwonde. To help you make friends with Liwonde before you visit, we've included a few helpful and fun things you should know about the area. Enjoy! 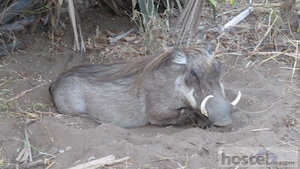 The national park covers about five hundred fifty square kilometers, with the Shire River running through it. It's quite a small park, so multiple animal sightings are very common -- there are frequent sightings of elephant, buffalo, hippo, crocodile, and several species of antelope. Two black rhinos were introduced into the park in the late twentieth century, and four cheetahs and two lions have been added in recent years. Nocturnal species such as bush babies, side-striped jackals, and spotted hyenas can also be seen on night drives.

Virtually all visitors stay in the national park rather than the town. Liwonde National Park has a couple of budget camps with hostel dorm accommodation. The Liwonde, Malawi hostel camps are the best places to organize safaris and nature walks in the park and these are extremely rewarding. The dorm accommodation is comfortable and spacious and you can either self-cater or take the set dinners and breakfasts. The hostels in Liwonde National Park also have viewing platforms from which to game watch, particularly in the late evening when the cooler temperature mean that some animals are more active just before sundown.

The park also has a healthy population of bird species including rarities such as racket-tailed roller, brown-breasted barbet, white-starred robin, Kurrichane thrush, and broad-tailed paradise whydah. Taking a boat safari is a great way to appreciate the park and you'll be rewarded with sights of crocodiles, hippos, and many bird species.

Liwonde is an essential stop for any international traveler in this part of the world. It gives visitors one of the best wildlife experiences in Southern Africa. The park is relatively small, but holds large populations of many of the most iconic African wild animals, making wildlife viewing immensely rewarding.

There are plenty of frequently asked questions about hostels in Liwonde. We've collected the most common questions and doubts when it comes to picking your preferred accommodation in Liwonde. The more you know, the better you can plan with confidence and ease, right?

This makes this very website the best place to find cheap accommodation in Liwonde.

Hostel? Check! Now let's have at your hostel packing list for Liwonde and Malawi.

Above we list every single hostel there is in the city. Let us take a broader look at what you can expect - and what not. We created this cheatsheet for you to get a more complete picture of the hostel quality in Liwonde, average prices and types of hostels to choose from.
1 Total number of hostels
9.1 Average rating of all hostels

Travel Tips for Liwonde - from the Community

Travel Tips for Liwonde - from the Community

Oh man, so far no one from the community has left a comment or travel tips for Liwonde. How about you kick start the discussion here? Gather your best backpacking recommendations for Liwonde and jot them down below. The community thanks you.