24 hostels available. Prices start from $6 for a dorm bed.
We compare all hostel prices in Skopje for you. So you save money and time!

This section is dedicated to take away all your "I wish someone had told me that before I went!" experiences. This way, you are better prepared for what to expect, what not to expect and can spend less time settling in, and more time making new friends in your chosen hostel. We share our insider knowledge of tips, tricks and important things to look out for in Skopje. To help you make friends with Skopje before you visit, we've included a few helpful and fun things you should know about the area. Enjoy! 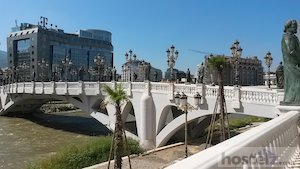 Skopje, the capital of Macedonia, has a population of more than five hundred thousand (about twenty-five percent of Macedonia’s total population). The city is located on the Vardar River. Skopje has been inhabited for more than six thousand years and it has great cultural and architectural heritage. The Roman and the Byzantine influence can be seen in many of the remaining artifacts from Roman and Byzantine times.

There are also many religious monuments in Skopje, such as the Church of Holy Salvation, the Church of Saint Demetrius at the Marko's Monastery, the Church of the Holy Mother of God, the Isa Bey Mosque, and the Mustafa Pasha Mosque. Other interesting sights are the Skopje Fortress, the Macedonia Square, and the Millennium Cross. You also need to visit the Old Town (many Skopje hostels are not far from it), which houses most Skopje landmarks including Turkish baths, a bezisten (covered market), and centuries-old inns such as Kapan An and Suli An.

There are enough places to go out although nightlife in Skopje is nothing special. Be careful, as there have been tensions between Macedonians and Albanians, so do not make any ethnic comments and try not to provoke locals on such topics. Otherwise, local people are friendly and you will not have any trouble. But train and bus connections to Skopje are not very convenient and you may have trouble traveling to and from Skopje. There is an international airport that serves different international routes.

A lot of Skopje hostels, while located in the center, are not easy to find, so be sure to write down the address and if you need assistance, ask locals for directions. There is also a second concentration of Skopje hostels next to the Gazi Baba Park and there are hostels in different parts of the city.

There are plenty of frequently asked questions about hostels in Skopje. We've collected the most common questions and doubts when it comes to picking your preferred accommodation in Skopje. The more you know, the better you can plan with confidence and ease, right?

This makes this very website the best place to find cheap accommodation in Skopje.

What are the best party hostels in Skopje?
Unity Hostel is the best rated hostel for partying in Skopje.

Hostel? Check! Now let's have at your hostel packing list for Skopje and Macedonia.

Above we list every single hostel there is in the city. Let us take a broader look at what you can expect - and what not. We created this cheatsheet for you to get a more complete picture of the hostel quality in Skopje, average prices and types of hostels to choose from.
24 Total number of hostels
$13 Average dorm price
$6 Cheapest hostel in Skopje
BSV Hostel is the cheapest
6 Party hostels in Skopje
Unity Hostel is the best rated
7.8 Average rating of all hostels

Oh man, so far no one from the community has left a comment or travel tips for Skopje. How about you kick start the discussion here? Gather your best backpacking recommendations for Skopje and jot them down below. The community thanks you.