Welcome to your detailed guide for hostels in Athens, Greece. You can choose from 32 Athens hostels. In total, there are 120 cheap places to stay in Athens such as guesthouses and bnbs. Prices start from $9 for a dorm.

Above we list every single hostel there is in the city. Let us take a broader look at what you can expect - and what not. We created this cheatsheet for you to get a more complete picture of the hostel quality in Athens, average prices and types of hostels to choose from.

Most Athens hostels are located in

Hostels in Athens for all Traveller Types

from $12
Best for Solo Traveller

Monastiraki
from $33
Best for Groups

Travelling on your own to Athens? Fabulous!

Pick a great hostel designed with solo travellers in mind, and you're bound to meet plenty of like-minded people who have also dared to venture to Athens alone. Here are the top hostels for solo travellers in Athens. We've also highlighted which hostel offers special perks you, as a solo traveller, will love. Each hostel offers great social spaces to meet fellow backpackers and wonderful opportunities for making new friends. You'll soon realise that travelling on your own definitely does not mean travelling alone.

This section is dedicated to take away all your "I wish someone had told me that before I went!" experiences. This way, you are better prepared for what to expect, what not to expect and can spend less time settling in, and more time making new friends in your chosen hostel. We share our insider knowledge of tips, tricks and important things to look out for in Athens. To help you make friends with Athens before you visit, we've included a few helpful and fun things you should know about the area. Enjoy!

Guess what? Athens is also named and spelled Athinai - It is the same destination. Goodbye confusion. 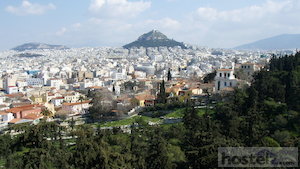 The legendary city of Athens is the capital of Greece. The city population of Athens during the 2010 census was over 3.1 million people in the central city area, and over 3.7 million in the metropolitan area. Athens can be, in many ways, considered the birthplace of western civilization, and is a city still filled with culture. There have been people living in Athens for over 7,000 years.

Athens can be reached by plane (which is the most common option for travelers, unless you are already in the country), the airport is a bit off the city proper but the public transport will get you easily to the main city area. You can also get to the city via buses, trains, or the ferry which links Athens to some nearby cities. When you're staying in an Athens hostel and traversing the city, it's good to plan ahead. Some places are very well reachable by foot but for others you will need to utilize the public transport system, which is pretty good.

Many travelers visit Athens before or after an island excursion, but the city also offers plenty on its own.

The political aspects of Athens are just a few of the many things to see. The most popular attraction near the government buildings is the hourly changing of the guard. Soldiers dressed in one-of-a-kind outfits march in front of Greece's Tomb of the Unknown Soldier. After the changing of the guard, visitors are often offered the opportunity to stand next to a guard for a quick photo. Nearby is the national park, a huge garden that is just one of the many walking and hiking paths that can be found in the center of Athens.

Hostels in Athens cannot really be categorized: there are so many different options, price ranges, and different districts to choose from.

However, the pricing generally will be about 10 US dollars if you choose a cheap single dorm, and upwards from there for twins / doubles and more quality. It's worth researching some before arriving: what do you want to do, and what area should you reserve an Athens hostel room to be close to those things?

When in staying in an Athens hostel, always remember to talk with the staff because they are generally very helpful.

Monastiraki Square, the Heart of the City

One of the most vivid sguares in Athens, Monastiraki Square encompasses strong night life, pleasure,and breathtaking view. In the last years, it is also a major metro station, making it easier for Athenians and tourists to visit plaka, acropolis, but also one of the biggest flea markets on sundays. Surrounded by genuine ouvlaki spots, tavernas, coffe shops, just a few minutes walk by a number of hostels, "furnished" with foutouristic benches, it is an authentic meeting and hanging out spot in the heart of the city.

I highly recommend to visit this square with your hostel mates. Have a look if you can find a hostel in Athens near Monastiraki Square. Very recommended!

There are plenty of frequently asked questions about hostels in Athens. We've collected the most common questions and doubts when it comes to picking your preferred accommodation in Athens. The more you know, the better you can plan with confidence and ease, right?

How much are hostels in Athens?

How to find hostels in Athens?

Hostelz.com shows all 32 Hostels in Athens. Simply filter by neighborhood and price to find your perfect budget place to stay.

Which hostels in Athens are good for couples?

City Circus Athens is the best hostel in Athens for couples.

What are the best hostels in Athens for groups?

Welcommon Hostel is the best hostel in Athens for groups.

What are the coolest hostels in Athens for female solo travellers?

What is the best way to find cheap accommodation in Athens?

Hostelz.com compares prices for 32 hostels in Athens, Greece. We list for you other cheap places to stay in Athens such as

This makes this very website the best place to find cheap accommodation in Athens.

What are the best party hostels in Athens?

Soph & Chris Northern Backpackers is the best rated hostel for partying in Athens.
It offers: Bar.

Travel Tips for Athens - from the Community

Hey fam! Here are a few more tips from the community, from them to you, and you to them. This space is dedicated for travellers to share their best tips on backpacking Athens. Have a closer look - the Hostelz community share real hidden gems, insider knowledge and overall impressions of Athens. Everyone is welcome to add something useful, funny, unexpected and the "absolutely necessary to know before you go" - share, share and then share a little more!

Spend one or two days in Athens -- go see the Acropolis, the museum, and Plaka, and then get out. Go to the islands or the small villages and see the "real" Greece. Most Greeks will tell you the same. Outside of that, it's just a generic, noisy, and polluted city.

Athens is the most polluted city ever visited. Nevertheless it has a lot of charm and is probably one of our favourite cities in Europe. Acropolis was not as expected -- Italian temples in Agrigento and Paestum are nicer ones.

I've been many times to the Greek Islands before and I never expected that Athens would be something special, but God was I wrong. Athens is an amazing place to visit and live. The atmosphere is totally different than the U.K. The food there is delicious, people are so friendly, and girls are beautiful. I went there during August for one week and the weather was great. There are many beaches around Athens and you can be there from anyplace at no time! There are a thousand antique monuments. However, sixties apartments are all over the city, but that's not really a problem when in Athens, because it's such a unique place.

Athens is wonderful. Out of the many places we visited, Athens was by far my favorite. The historical places are so moving -- coming from such a young country (U.S.A.) the antiquity and ageless beauty almost took my breath away. The people go out of their way to be friendly and helpful. The food is fresh, prepared well, and delicious. Using the metro was easy and cheap -- signs and announcements are made in both Greek and English. Also the street signs are in both languages. Most everyone spoke English to some degree. I did not see any of the "less than pretty image." Everyone seemed proud of their city and projected a real happiness. The streets were clean, the metro stations beautiful, and the tourist office is great. We received a beautiful all-color tourist book on Athens for free, as well as numerous other pamphlets and helpful, informative staff. Overall, go to Athens! You will be richly rewarded in your Athens travel experience.

Athens was gorgeous and the food is AMAZING! The underground system isvery easy to navigate and all the people were incredibly friendly. Athens by far has the most character of any city I have visited.

Athens is lovely. You may be scared by the less than pretty image it sometimes has. BUT the old city is beautiful to wander through. I like nothing better than eating a gyros and wandering up to the Acropolis hill and looking over the night lights of the city. It has its dirty noisy bits, but unlike many clean and tidy places, Athens has character.

Hostel? Check! Now let's have at your hostel packing list for Athens and Greece.