Welcome to your detailed guide for hostels in Narva, Estonia. You can choose from 1 Narva hostels. In total, there are 5 cheap places to stay in Narva such as guesthouses and bnbs. Prices start from $9 for a dorm.

This section is dedicated to take away all your "I wish someone had told me that before I went!" experiences. This way, you are better prepared for what to expect, what not to expect and can spend less time settling in, and more time making new friends in your chosen hostel. We share our insider knowledge of tips, tricks and important things to look out for in Narva. To help you make friends with Narva before you visit, we've included a few helpful and fun things you should know about the area. Enjoy! 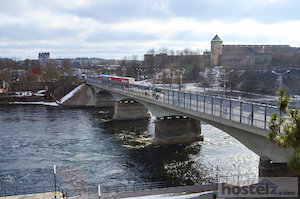 Narva, Estonia, is a small town located on the border of Estonia and the Russian Federation. You can get there by bus or by train. The bus station and the railway station are located a bit away from the city center, but can be reached by foot. It takes about six hours to get from Narva to Tallinn and about a half-hour to go by bus to Narva-Jõesuu with an active beach life in summer and cozy SPA hotels all year round.

Tourists prefer not to stay in Narva for a long time, as there are fewer places to sightsee than at some other areas of Estonia. However, you may need a place to stay for a night, and in this case there are few cheap Narva, Estonia hostels, hotels, and guesthouses. So, tourists often choose to rent an apartment, as it is easier to find and cheaper than to stay at a hostel in Narva, Estonia.

The most historical part of the town is Narva Castle, which stands on a hill near the river. There is a museum in Narva Castle, and some public events such as jazz concerts and celebrations are held there. From Narva Castle you can see Ivangorod Fortress located in the other (Russian) part of the Narva River. The border with Russia goes by water, right in the middle of the river, and there is the Bridge of Friendship connecting the two checkpoints. Tourists usually cross the border on foot, by bus or by car. Narva's side has a tax-free point but it isn't open twenty-four/seven.

The heart of the town is Town Hall Square (Narva Raekoja plats) with a historical building of the Town Hall, which neighbors a modern building of Narva college of the University of Tartu. Besides the student facilities there is a nice cafe Muna inside Narva College and a room for exhibitions on the ground floor.

From the Town Hall Square you can walk down to Narva Promenade located by the river. There are some bike tracks, and you can see locals cycling, roller-skating, jogging, and walking their dogs in any season. There is also a shadow clock in the pavement.

The main city food chain is Rimi. There are also shopping malls in Narva, including Famu and Astri. Russians are used to buying clothes there during a one-day shopping tour (without staying in the hostel) to Narva.

Buildings of Narva look neglected. Some buildings need renovation and some look exactly as apartment houses built in the era of the Soviet Union. Outside of the city center there are some factories, including the former cotton mill Krenholm Manufacturing, which used to be one of the largest in Europe at the beginning of the twentieth century. Most of the religious buildings in Narva -- including the Resurrection of Christ Cathedral -- belong to the Orthodox Church.

The people of Narva usually speak both Estonian and Russian, and young people may speak some English.

There are plenty of frequently asked questions about hostels in Narva. We've collected the most common questions and doubts when it comes to picking your preferred accommodation in Narva. The more you know, the better you can plan with confidence and ease, right?

How to find hostels in Narva?

There is exactly 1 Hostel in Narva, Estonia. Hostelz.com compares the prices for this hostel so you can get the best price on any major booking site.

What is the best way to find cheap accommodation in Narva?

Hostelz.com compares prices for 1 hostel in Narva, Estonia. We list for you other cheap places to stay in Narva such as

This makes this very website the best place to find cheap accommodation in Narva.

Travel Tips for Narva - from the Community

Oh man, so far no one from the community has left a comment or travel tips for Narva. How about you kick start the discussion here? Gather your best backpacking recommendations for Narva and jot them down below. The community thanks you.

Hostel? Check! Now let's have at your hostel packing list for Narva and Estonia.