Welcome to your detailed guide for hostels in Havana, Cuba. You can choose from 26 Havana hostels. In total, there are 350 cheap places to stay in Havana such as guesthouses and bnbs. Prices start from $6 for a dorm.

Above we list every single hostel there is in the city. Let us take a broader look at what you can expect - and what not. We created this cheatsheet for you to get a more complete picture of the hostel quality in Havana, average prices and types of hostels to choose from.

(Enzo's Backpackers is the cheapest)

(Cuba 58 Hostel is the best rated)

Most Havana hostels are located in

Hostels in Havana for all Traveller Types

Travelling on your own to Havana? Fabulous!

Pick a great hostel designed with solo travellers in mind, and you're bound to meet plenty of like-minded people who have also dared to venture to Havana alone. Here are the top hostels for solo travellers in Havana. We've also highlighted which hostel offers special perks you, as a solo traveller, will love. Each hostel offers great social spaces to meet fellow backpackers and wonderful opportunities for making new friends. You'll soon realise that travelling on your own definitely does not mean travelling alone.

This section is dedicated to take away all your "I wish someone had told me that before I went!" experiences. This way, you are better prepared for what to expect, what not to expect and can spend less time settling in, and more time making new friends in your chosen hostel. We share our insider knowledge of tips, tricks and important things to look out for in Havana. To help you make friends with Havana before you visit, we've included a few helpful and fun things you should know about the area. Enjoy! 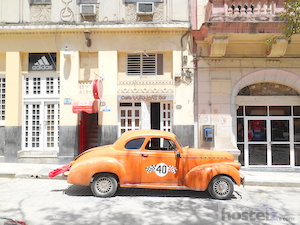 To wander Cuba’s capital city - though it is slowly developing - is to feel like walking around on set of a movie from the fifties. It is impossible not to be charmed by the crumbling colonial buildings, patched-up classic American cars, and a laid-back Caribbean attitude, which make Havana the rightful tourist hotspot of this amazing country.

There are plenty of options for hostels in Havana and places to stay, whether in happening Vedado or amidst the splendor of Havana Vieja (Old Havana). Cuba allows its citizens to register with the state in order to open their houses up to paying guests and most "hostel" accommodation is to be found in such Casas Particulares.

Quality and hospitality is usually of a very high standard, though backpackers will find that staying in a Casa is more expensive than typical hostel accommodation elsewhere in the world as prices tend to be per room. Meals are generally offered too but probably won’t be as cheap as eating out in many places, though they are likely to be high quality and enormous. Budget backpackers will have to get their fill of cheap eats in the form of poor quality pizzas and hotdogs.

Flags and Communist slogans are everywhere, amidst a constant peppering of Che Guevara’s iconic image. This is never more apparent than at the Plaza de la Revolución, where the vast monument to Cuban hero Jose Marti is almost overshadowed by two Soviet-looking tower blocks bearing the images of Fidel Castro and Che Guevara.

Havana has plenty of sights, museums, and activities to occupy the most restless of travelers. Visit a cigar factory, sample the national tipple at the Havana Club Museum, marvel at historic buildings, or engage with the country’s fascinating past at the Museum of the Revolution.

The daytime action in Old Havana stretches from the Capital Building and down the busy Paseo del Prado, where many shops and restaurants can be found. In the evening, the hustle and bustle moves to the waterfront promenade -- the Malecón. Children splash about in pools, fishermen unravel never-ending reels of nylon, lovers stroll, and buskers bask in the hazy sunlight; it makes for excellent people-watching and great photographs.

Most tourists will undoubtedly pay at least one visit to the huge Hotel Nacional to sit in the grounds and sample a mojito or two and watch the action of the Malecón unfold on the street below. Less touristy nightlife is generally found away from the old town. Vedado has a good mix of bars and live music venues frequented by locals and visitors alike. Ernest Hemingway fans can devise their own pub crawl by visiting the various haunts frequented by the American writer during his Cuban residency from the forties to the sixties. There is also a highly acclaimed museum devoted to the author in his former home on the outskirts of the city.

There are plenty of frequently asked questions about hostels in Havana. We've collected the most common questions and doubts when it comes to picking your preferred accommodation in Havana. The more you know, the better you can plan with confidence and ease, right?

How much are hostels in Havana?

How to find hostels in Havana?

Hostelz.com shows all 26 Hostels in Havana. Simply filter by neighborhood and price to find your perfect budget place to stay.

Which hostels in Havana are good for families?

Hostal Maritza de la Osa is the best hostel in Havana for families.

What are the coolest hostels in Havana for female solo travellers?

No Limit Hostel is the best rated hostel in Havana for female solo travellers.

What is the best way to find cheap accommodation in Havana?

Hostelz.com compares prices for 26 hostels in Havana, Cuba. We list for you other cheap places to stay in Havana such as

This makes this very website the best place to find cheap accommodation in Havana.

What are the best party hostels in Havana?

Cuba 58 Hostel is the best rated hostel for partying in Havana.
It offers: Bar.

Travel Tips for Havana - from the Community

Oh man, so far no one from the community has left a comment or travel tips for Havana. How about you kick start the discussion here? Gather your best backpacking recommendations for Havana and jot them down below. The community thanks you.

Hostel? Check! Now let's have at your hostel packing list for Havana and Cuba.