6 hostels available. Prices start from $8 for a :roomType.
We compare all hostel prices in Veliko Turnovo for you. So you save money and time!

This section is dedicated to take away all your "I wish someone had told me that before I went!" experiences. This way, you are better prepared for what to expect, what not to expect and can spend less time settling in, and more time making new friends in your chosen hostel. We share our insider knowledge of tips, tricks and important things to look out for in Veliko Turnovo. To help you make friends with Veliko Turnovo before you visit, we've included a few helpful and fun things you should know about the area. Enjoy!

Guess what? Veliko Turnovo is also named and spelled Veliko Tarnovo - It is the same destination. Goodbye confusion. 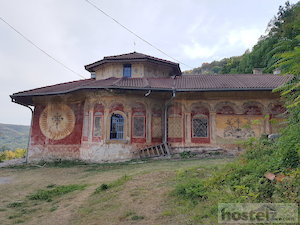 Veliko Turnovo is a very beautiful city in Bulgaria that is just a few hours from Sofia, Varna, Russe; Arbanassi, a picturesque village with old houses and traditional cuisine, is less than ten kilometers from Veliko Turnovo. The town was a Bulgarian capital in the Medieval Ages and still has monuments from that time -- you can spend several days experiencing it all. Few cities in Bulgaria can match Veliko Turnovo's many sights from almost any time in history, including the main sight, Tsarevets, the fortress on the hill with the same name where Bulgarian kings used to live for two centuries. It is quite large and you will need several hours to walk through it. There is a light night show in the summer on Tsarevets. There are many museums, churches, monuments, and old buildings. Take a walk near Yantra, the river.

There are several hostels in Veliko Turnovo, most fairly new, and all located in the Old Town near Tsarevets. Hostels in Veliko Turnovo are generally cheap and do not differ much in price with a few exceptions. They are a bit hard to find as the streets are small, but the view is amazing and Tsarevets is close. Food is cheap and you can have a great lunch at a restaurant, there are bars and clubs for any taste and price level, and nightlife is good.

Taxis are very cheap and a better option than public transportation if there are several in your group. The train station is about seven kilometers away, but there are buses that go to the city. At weekends, there are not so many buses, so you can easily wait one hour for the next bus. In general, transport links to other cities are not great.

This makes this very website the best place to find cheap accommodation in Veliko Turnovo.

Travel Tips for Veliko Turnovo - from the Community

Travel Tips for Veliko Turnovo - from the Community

Hey fam! Here are a few more tips from the community, from them to you, and you to them. This space is dedicated for travellers to share their best tips on backpacking Veliko Turnovo. Have a closer look - the Hostelz community share real hidden gems, insider knowledge and overall impressions of Veliko Turnovo. Everyone is welcome to add something useful, funny, unexpected and the "absolutely necessary to know before you go" - share, share and then share a little more!