8.4
313 Reviews
Top Location
Cheapest Hostel in Oamaru
We compare all hostel prices in Oamaru for you. So you save money and time!

Empire Hotel Backpackers is listed at the following booking sites:

How is Empire Hotel Backpackers rated on booking websites?

This place is a good place to stay for a few nights. Unfortunately the beds were not comfortable and you could easily hear any noise coming from outside. There is a toilet and showers which are shared amongst the guests. The kitchen is fully equipped, but is only available to use before 10pm. The dinning room is shared with the living room space where there is a TV and loads of movies to watch. The location is right in the middle of the city centre and was easy to locate. The staff were very friendly.

We had an excellent stay at Empire. Everyone was super nice and helpful during our whole stay. The whole place was very clean, and the kitchen was well equipped. I would definitely recommend staying here!

The Empire Hotel, unlike most backpackers', has been a hotel since the 1880s, and it was elegant in its day. Since modern plumbing has had to be added retroactively, it is now best suited to serving backpackers rather than dignitaries.

The Empire is right at the edge of Oamaru's Victorian Old Town. It is very well located for visits to the historic district, and a pharmacy, a supermarket, and a computer store are all within three blocks. It is also next door to two working railways -- a modern freight line and a vintage steam train, which is great for train buffs, but a tad noisy.

The Intercity bus station is only three flat blocks away, on the same side of Thames Street. As you approach from the station, you'll come to a pair of narrow red doors with a neat gold "13" on them, and next to it will be the Empire Hotel's sign. Drivers will see the hotel's awning, which stretches out over the sidewalk and says "BACKPACKERS," before they see the sign. There is ample parking in a lot behind the hotel.

Each guest receives two keys -- a room key and the key to the front door, which is locked from 9 p.m. to 9 a.m. Dorms have bunk beds and singles, doubles, and triples are also available. There is a unisex bathroom on each floor. The upstairs bathroom contains two toilets, each with its own small sink, four vigorous showers, and two more sinks. There is a changing area, with hooks, in front of each shower.

The Empire Hotel has a comfortable TV lounge on the ground floor and a computer lounge on the first floor. Wi-Fi service is excellent and relatively inexpensive though the advertised "free internet" is a bit misleading -- you get one hour's free use a day. There are three computers for the use of guests without laptops, rented at the same rate.

There are two kitchens, one on each floor. A laundry room and a "games room" are in the basement -- in the latter are a pool table and a piano, but we never saw anyone using either while we were there. The TV lounge is well used; the computer lounge is rather quiet. Most guests, at least when we were there, are young international travelers.

We like the Empire. In addition to the points mentioned above, it is within walking distance of the Little Blue Penguin Reserve, for which Oamaru is famous, and its proximity to the ocean means that little blue penguins can sometimes be seen in the parking lot of the hotel! 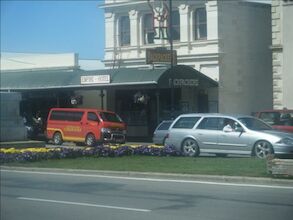 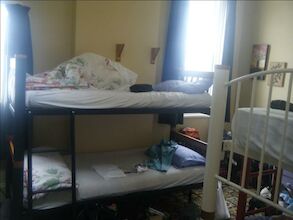 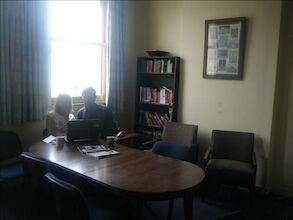 I paid 23 bucks a night and got you get free internet, free pool table, and free tea and coffee -- what more can you ask for! they have 2 kitchens as well which means it isnt crowed and a tv room as well within the lounge area. rooms are very clean and reasonable size as well. this hostel got recommended to me and im so happy it did. would recommend to anyone staying in oamaru.

Right in town so close to blue penguins, bars. Facilities were fine but not much of an atmosphere when I was there. Free internet was great but there was, unsurprisingly, always a queue!

I have just finished my trip around the South Island and have to write and congratulate the Empire on being the best accommodation I had.The location was great being close to the old Victorian part of the town and to the cute penguins.The free internet was great and the clean rooms and bathrooms were fantastic.The managers were really friendly and helpful and the huge carpark at the back of the hotel was a bonus. I would love to come back in November for the Victorian weekend and to see the penguins again.

We arrived during office open hours but no one was there. The bed was old and soft, pillows were hard as rock and the towels were pretty threadbare. There was no atmosphere at all; we ended up reading our books in our room. The location is awesome though and so was the one staff member we encountered. Would not stay again.

I loved my days there, very attentive staff. Good shower, location, don't need glamour if you want to enjoy the city and have only one place to sleep

What a great hostel, really enjoyed my stay. Booked 2 nights and ended up staying for 6. Clean everywhere, lovely hot showers, good kitchen & socialising space, cosy lounge downstairs with log fire. The people that run it are super nice. Bruce has excellent local knowledge about Oamaru, and the history of the hostel building. One of my favourite hostel stays in NZ and there have been many!

A great place to stay. The staff are laidback, friendly and very interesting to talk to. The rooms are clean and spacious and the beds very comfortable. Both the heating and WiFi functioned ideally. The kitchen had all the amenities with a very cooking and eating area. The Hotel has an old victorian style atmosphere. I highly recommend this place.

It was kept warm with a big log fire, heaters in bedroom and electric blankets which was just the things I needed in the cold south of NZ

Liked: Very central location. Great, helpful staff. Nice tv room with a great fire and good shared bathrooms. We managed to get a double room rather than the twin that we had been able to book.Nice kitchens with plenty of space. Didn't like: The rooms could do with a makeover and the mattresses are not great, but this is still a good budget option

Liked: The staff was very friednly and helpful, rooms and also bathroom & kitchen were perfectly clean, kitchen was well equiped, location was central Didn't like: Was a little hard to find

Liked: Nice central location Didn't like: Hostel had messed up our booking, took a while to clean up an extra room for us. First manager couldn't access money box, had to wait for a different person later that evening. Cash only payments

Very handy to the town centre and activities. Very clean, light and comfortable.

Liked: The hostel is in an old building but it is well maintained and quite clean. Kitchen is well equipped and there is a nice entertainment area as well. The bed was quite comfortable and we all got a good sleep. It is also within walking distance to the penguins but i highly doubt their claim that the penguins ever walk to them. Didn't like: Reception was abit cold.

Our hostel is a restored historic hotel, built in 1867. We are 50 metres from the information centre (i-SITE). We are well known for being clean, warm and friendly "just like home." The following amenities are FREE:- pool table, off street parking and video library. There are 2 lounges, one with a TV/DVD, 3 internet kiosks and a log fire. Our rooms have heaters and our bathrooms have endless hot water.
We are part of the Historic Precinct and we are a 15 minute walk to the Blue Penguin Colony. Closeby is a good selection of restaurants, cafes, bars and other amenities.

• Guests arriving by car should follow the signs to the i-SITE. Our orange sign is visible 50 metres up the street on our verandah roof above our door.
• For Intercity bus passengers we are a 5 minute walk south along the main street (Thames Street). Look for the notice on the pavement by our front door. Other buses and shuttles (e.g. Magic Bus, Cook Connection, Penguin Express) stop at our door on request.

Empire Hotel Backpackers is listed on the following booking sites:

(if you know the URL of their website, let us know and we'll add it)
Phone Number: 03 4343446
To add or correct information for this listing, please use the Listing Correction Form.

Reception Hours: 9am to 9pm

See all hostels in Oamaru

See all 4 hostels in Oamaru