Prahran
5.2
267 Reviews
Prahran
We compare all hostel prices in Melbourne for you. So you save money and time!

Lords Lodge Backpackers is listed at the following booking sites:

It is the only way to book Lords Lodge Backpackers

How is Lords Lodge Backpackers rated on booking websites?

Lords Lodge Backpackers is a relatively small hostel in a beautiful old building where a lot of long-termers stay. It has a community feel to it and it might feel like everyone knows each other for a long a time when you first get there. As you might expect, when people stay in one place for a while, they collect quite a lot of stuff and that's obviously the case here. Some of the rooms are completely packed and might not be too clean, but no one seems to really care about that. They'd rather open another beer and talk about their jobs, job hunt, or if they'll go out and party the upcoming weekend. If you are planning to stay in Melbourne for a while and you'd rather make a bunch of friends for life than stay in a tidy room, then this might be the place for you.

The hostel is located on a busy street in the suburb Prahran, in about the middle between the city center and St. Kilda Beach and just a ten-minute walk away from hip and trendy Chapel Street. There is a bus stop exactly in front of the front gate and the tram stop, from where almost every tram (every three minutes!) will take you to the city. The supermarkets and bottle shops are within a five-minute walk and are open seven days a week until late.

Rooms and bathrooms are being cleaned by a few of the long-termers that stay at the hostel (there is a waiting list for that job!). The bathrooms are cleaned twice a day, and are generally pretty clean, but can be a bit messy at times; we don't think that this has to do with the cleaners, but more so with some of the people staying there when we were there.

The rooms vary in sizes, from really big with a small TV room in it and a couch to chill out on, to a bunkbed and a place to stand next to it. But the manager will never consider it a problem if you would want to change rooms after you picked your favourite. As said before, some rooms can be really messy because of the amount of stuff people collect after a long time. Every room has lockers (bring your own padlock) and a fridge! If you want a clean towel or clean bed linen, just go to reception and get some!

There is big, green lawn with umbrellas and a few big bean bag to chill out on on a hot day and sometimes even an inflatable pool. Every now and then on a hot Sunday the manager will invite every one for a BBQ. On the backside of the hostel, is the kitchen, with a bar setup, amazing lighting (at night), and a big table. This is where the action happens and there will always be someone having a meal or enjoying a drink.

At the back of that area, a place you wouldn't know about if you would not go exploring first is a big table-tennis table where the occasional table-tennis competition is being held or where a game of "goon pong" would be going on. The TV room has a beautiful old wooden floor, a lot of comfortable big couches and a big flat-screen TV, where people will be discussing about what show or movie to watch. No one worries about having a beer or a meal here, just make yourself at home!

If you're planning on staying in Melbourne for a while, want to meet some amazing people, and don't care about a tidy room too much, this is definitely the place to be! 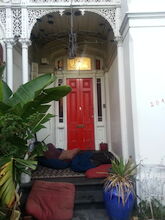 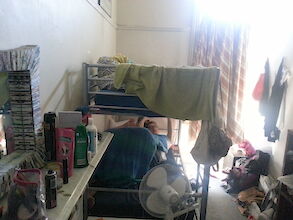 The hostel has such a great, welcoming atmosphere -- everyone here is so friendly. The rooms all have lockers (bring a padlock), the kitchen is fully equipped, and free wi-fi is a massive bonus. The place is cleaned daily, although it can end up quite dirty at the end of the day but you get what you pay for really. The building could do with a bit of a touch up, although I heard it's getting a massive overhaul in the next few months. There is free "sangria" on Saturday nights, and occasional free BBQs, which are such a great touch. The staff were really helpful, and Pat -- the owner -- is one of the best guys I've met; he'll go out of his way to help if he can.

Loved Lords Lodge -- owner Pat was super helpful and the place was clean and friendly. We stayed in a double (though saw the dorms and they were comfy too, we just wanted some luxury as we'd just flown in from malaysia!) in the garden area at the back and were really, really comfortable with our own tv and fridge, the internet always worked, and its a great place to meet people to begin the next bit of your travels with. Would definitely return and highly recommend it to everyone.

Want to run away after two minutes

Dirty, noisy, no hygiene -- a complete mess! I would not recommend it to anybody.

Saturday BBQ is not free, it cost $5. Only Pizza occasionally only is free if the weather too cold. Kitchen toilet quite dirty. A non-smoking place but always people smoke in room and toilet. Rooms clean every two weeks. So you imagine conditions of room. Only thing good is the location, Pat, need to improve more, man.

I loved the warmest friendliest hostel in Australia. I have been backpacking for years and have stayed in hostels in every continent. I loved this place so much. It's close to St. Kilda, the trams and the train station, so the location is great. It gets cleaned three or four times a day, so for all of you "flash-packers," as hostels go, this is one of the cleanest you'll get! There is a free BBQ every Saturday which includes lots and lots and lots of Sangria, courtesy of the owner Pat -- yes he is a legend! Free wireless internet is nice when you wanna talk to your mates at home. The rooms are nice and big with plenty of storage space. There must be something up if you can't make friends here. Brilliant atmosphere, excellent staff, a true haven to come back to time and time again. Oh, you gotta love the open fire in Winter and the croquet pitch in the front garden too! I'll certainly be coming back.

I checked in then checked out in the space of five minutes. Only stay here if you are seventeen and like living in a dump.

I really did not like this place. It's mostly fill of long term stayers who have their stuff everywhere and you feel like you are invading. Atmosphere didn't seem right for someone new to melbourne. Staff and people were nice enough though. It was so unclean and I'm not even that fussed as long as it's a basic kind of clean. I've been in many hostels but this was one of their dirtest. The coakroches in my bed were the final straw. I left early and would not recommend.

Liked: This place is awesome for long stayers who want to make friends and have a home away from home. Staff is friendly and helpful. Didn't like: The place is being renovated right now so downstairs smells like paint.

Liked: Cool backyard to hang outNice showers Didn't like: Room doors are unlocked at all times

Liked: free car parkquite in night Didn't like: old, unclean and smell funny.......showerroom is not heated,so cold when u took shower in night

Liked: It is a good place to sleep , it's very quiet in the night! And you can hire dvd's to watch on your room , so that was nice as well. You have free coffee and tea in the morning and ree internet. Didn't like: We did a booking in the morning and we arrived around 1 pm and had to wait untill 5 pm when we could be in our room!! There was no-one at the reception who could help us and we were very tired of travelling.The first thing we saw in the fridge was 2 huge cockroaches and a lot of empty things in it as well. So the hostel isn't so clean at all - maybe they need to look for another kitchencleaner??-

Lords Lodge is a 135 year old historical mansion with charm and character. It is a small, cosy hostel with a friendly and relaxed atmosphere offering good quality, clean and budget accommodation for all ages.

At Lords Lodge we offer you:
Free, unlimited wireless internet
Free Sangria on Saturdays
Lots of help in finding work in Melbourne

Lords Lodge is owned and operated by YOUNG Melbournians and travelers. We have the most friendly and knowledgeable staff in Melbourne!!

We are located in Melbourne's most fashionable area and just a 5 minute walk away from St. Kilda and 5 minutes by tram to the city centre. Chapel St and Commercial Rd are only minutes away offering the best of Melbourne shopping, pubs and clubs, banks, post office, 24hr supermarkets, swimming pool and gyms. Easy Access to the Airport with the St.Kilda and Frankston/Peninsula Skybus.

Our local, knowledgeable staff can help you with all your travel arrangements including tour bookings, buying or renting cars and finding work.

Take tram No.3-5-6-16-64 from Swanston Street until stop26 and walk up Moubray Street. You can also take the Train from the city to Prahran Railway Station. From there we are 5 minutes walk left along Greville Street.

Lords Lodge Backpackers is listed on the following booking sites:

(if you know the URL of their website, let us know and we'll add it)
Phone Number: +61 (3) 9510-5658
To add or correct information for this listing, please use the Listing Correction Form.

See all 49 hostels in Melbourne

See all 49 hostels in Melbourne