7.9
1 Reviews
We compare all hostel prices in Crawford Notch for you. So you save money and time!

your hostels in Crawford Notch

Best place for budget travel in the White Mountains of NH

I have spent a few nights at the Bunkhouse in winter, to warm and start fresh on winter dayhikes. There is a shower in the bunkhouse, and the pictures on this page are not all of the bunkhouse (bottom two are of AMC Mountain Huts) I was suprised at the writers somewhat negative comments. This is really a nice, clean place for a very good value, in the heart of some of the best mountain climbing and hiking trails in the Northeast, including the famous Crawford Path to Mt. Washington Summit, directly across the road.

Shapleigh Bunk House at the Highland Center is an unappreciated gem in the wake of mainstream outdoors -- this is the place where those who go camping without a TV go to watch at a short distance those who think driving up a mountain is the same as hiking it.

This hostel, like most in this state, is located in the northerly regions in the beautiful white mountains of New Hampshire. This one is located directly on RT 302 east of RT 3 and the town of Twin Mountain -- the closest few amenities are there. It is just before Crawford Notch, which is a breathtakingly gorgeous portion of these great mountains complete with an old -- but still operating -- rail line that travels along the cliff faces, and was erected originally in the early 1800s.

The hostel is actually only about a mile from the beginning of the state park and train station. It is on the grounds of the AMC Highland center, a fantastically large and misplaced resort-type building placed in these pristine mountains. It is here that you can seek a room for the comparatively tiny shack, the bunkhouse, which they built on the edge of the property for those who don't want to shell out big money for a place to sleep.

Apparently many people didn't like the sound of going to the mountains without upstanding luxury, because we were the only guests on a Friday night during our stay. It added a bit more fun to the whole thing, we suppose -- not even any staff members spend their time out here, except for the occasional visit. We presume it is them checking for people skipping out on paying, disguised as courtesy visits as each one checked each bunk room. The bunks in the bunkhouse are very nice and clean -- we are highly impressed. This place screams value, especially since it's half the price of the accommodations next door and we were alone, so it felt like we practically rented the entire place.

The bathroom consists of a toilet on one end with a sink and then the same at the other side -- nothing fancy here, you are granted the right to use the complex's shower on the grounds next door, however. This is where you will also go if you want to have free breakfast in the morning, consisting of a hearty buffet that is actually pretty good. This is also the place to prepare any food, as there is no kitchen save for a small fridge and a weak microwave in the bunkhouse.

The common space consists of simply a few benches and tables connected to its sad excuse for a kitchen area -- no TV or anything. It is pointless because directly seven feet ahead are a few chairs strategically placed outside for you to take in the grandeur and scale of the soaring peaks and ridges that quickly rise above you. This is where we spent most of our time, staying an extra night to relax and explore the nearby areas. The Highland Center also has a common area where we went for a short while -- it feels fake, good for someone who wants to forget they're in the mountains, and we get an unwelcome feeling like we are outsiders from the bunkhouse.

If you're going to be spending a night out at Crawford Notch, do yourself a favor and go here. Save at least half the price over the Highland Center on the same grounds and take advantage of there amenities and the true outdoors feel and views. One word of advice -- if you go here make sure to bring a grill. We did and realize it would have been very expensive and a pain to either eat out at the Highland Center every meal or to go many miles to town. They do have a microwave but by no means did that suffice for us. 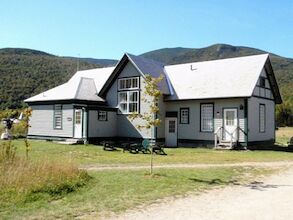 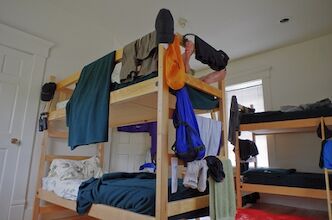 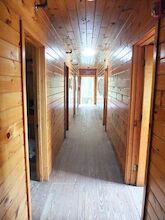 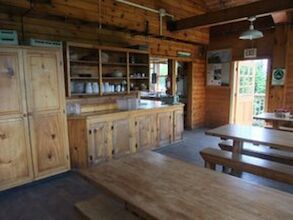 The Shapleigh Bunk House provides low-cost lodging and breakfast for hikers and other visitors. It is located on the grounds of the Appalachian Mountain Club's Highland Center Lodge which is a full-service lodge with both shared and private rooms. The rate includes a bed with clean linens, towel, shower, and a full breakfast. A pantry with fridge, microwave, and sink are available for use. There is no stove available.

Shapleigh Bunk House at the Highland Center is listed on the following booking sites:

www.outdoors.org
Phone Number: +1 (603) 466-2727
To add or correct information for this listing, please use the Listing Correction Form.