8.5
7 Reviews
We compare all hostel prices in Polebridge for you. So you save money and time!

your hostels in Polebridge

Simply amazing. Take time to relax at The Northern Lights Saloon, share some beer and food, and spend time speaking with Oliver at the hostel. Great guy. The peace and serenity of this place should be savoured. The drive is fun. Having traveled the world, this is a must. Ever heard silence? Sit in the wood-burning hot tub at the hostel and watch the Northern Lights and remember you have one life! If you don't get this place, check for a pulse.

Be advised that the North Fork Hostel is a wilderness hostel -- six beds per dorm room, no electricity (propane and kerosene lighting), outhouses, a rather lukewarm shower and bath, kitchen with gas stove, and a cozy common room. Teepees are available for lodging if you want.

Polebridge is off-the-grid! And the residents consider that a good thing -- a quick look at posters and bumper stickers tells you they are very vocal about preserving the North Fork and preventing development. Hostelers are all beneficiaries of these efforts. The town and hostel have a very friendly, backwater feel to them, and the hostel itself maintains a very communal atmosphere fostered by Oliver, a most friendly and laid-back host. Long-term guests have even pitched in with such activities as building horseshoe pits.

Another one of America's most beautiful national parks is right at your doorstep -- hiking, kayaking, and skiing are just a few of the activities available! And the hostel puts you at one of its more secluded corners near Kintla Lake and the pictured Bowman Lake, if that's what you're after. Nightlife in Polebridge is mostly watching the sunset until about 10:30 p.m. or later in the summer, all the while recounting the day's events such as capsized canoes in the North Fork.

If you are looking for a unique hosteling experience in Glacier National Park and have no problems going without electricity and plumbing, this is the place for you. 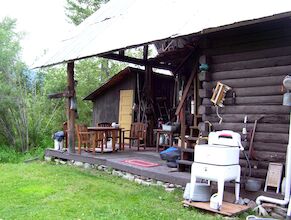 The North Fork Hostel was a great place to stay, considering that the town had no electricity and the roads are unpaved. My only gripe is the fact that the social atmosphere is lacking, especially for single travelers such as myself.

I stayed at the hostel on August 5-6, while on my way back to the East Coast. I have to warn anybody who decides to venture to Polebridge that your car's shock and struts will take a toll. Right now I have my car in the shop because they have been worn out that bad. I brought a Chevy Cavalier. If you have a four-wheel drive car, bring that.

Concerning the hostel itself, the place was really made by the German caretaker, Oliver. He was so laid back and helpful that he didn't ask for money until I left. I was so used to paying beforehand that I was almost annoying about paying him. He's a really great person and I definitely recommend having a conversation with him.

The facilities are surprisingly good for a place that relies on propane for energy. The kitchen is definitely useable and goods can be stored and refrigerated. The dorm rooms are clean and the beds use actual mattresses (a rare thing in hostels). Showers are available with running water. However, for bathrooms, everybody uses an outhouse.

The location is all about the great outdoors. This is where you escape to when you want some air (although if you are on the Continental Divide in Glacier, air could be hard to come be). Since Polebridge is on the western side of the park, there are a lot fewer people in the area. However, to get to the main parts of Glacier, it is about an hour and a half ride. No matter where you go though, there is a variety of wildlife. I saw lots of deer, mountain goats, etc. Some people told me that they say bears and moose, but being that I went during the summer, you don't see so much. At night, the area is beautiful and the stars really come out. Hailing from the New York City area, I was surprised to see the Milky Way Galaxy.

Note: If you are a city person like myself, things could be a bit interesting at night. It gets very dark. Very, very dark. Now, I am not a chicken but the knowledge that grizzly bears do sometimes live in the area is a bit unsettling, especially when heading to your car at 6 in the morning.

If a person doesn't do anything else in their lifetime he or she needs to visit "Heavens Gate," The North Fork, and spend some relaxing time within John's walls.

Beautiful! Just beautiful! And everyone is very friendly and laid back. It truly is a real treasure.

I have spent many nights in the comfort of this hostel. I must say the Square Peg cabins are the best way to go. As a former, and in my heart still present, Montana resident I must say "Please treat this place with respect, and love." Polebridge is a slice of heaven on earth, and the great people who reside there will appreciate your care. As for the hostel, you will not find a better location, more breath-taking views, and the chance to see wilderness at its best than at the one and only North Fork Hostel. Thanks, all of you.

It was dusk as I drove North along a dusty gravel road into Polebridge. I found the hostel at the end of a lane, with wild deer grazing alongside the owner's horses. A propane tank on the roof provided plenty of hot showers. The huge old lumber camp cook stove provided warmth and heat for cooking. The battery-operated VCR yielded an old Humphrey Bogart movie until it died. Then we finished up the evening with good old-fashioned fellowship before retiring to our sleeping bags in our bunk beds. On the way out we came upon the biggest huckleberry patch I had ever seen. The patch came complete with grizzly and black bears chomping down on the berries, apparently oblivious to me. It was as though they were saying, "been there, done that, hey, I got the T-shirt!" An unforgettable getaway IF you are up for the adventure.

The North Fork Hostel is FANTASTIC if you don't mind roughing it a little bit and giving up a few luxuries. Polebridge is a tiny, tiny town. To get there you have to drive about 6 miles over a bumpy dirt road. The town has one store that also serves as a post office and bakery. There is one little cafe that serves delicious homemade meals. In the evening, everyone at the hostel walked to the cafe for supper. Seems like everyone in the tiny town shows up the cafe for supper. Most people sit outside at the long wooden picnic tables. There's no electricity, so you have to find your way back to the hostel by using a flashlight. The hostel is clean. People friendly. Don't forget your flashlight!

Propane lights brighten your nights (there's no electricity in Polebridge). Although the area is off the power grid, the hostel has its own power supply to offer you a cordless phone, a fax machine and a computer. Camcorder and digital camera batteries may be recharged at the hostel, we even have wifi!. A propane cooking range and refrigerators are available to make your food preparation easier after you have spent an exciting day exploring the area.
Visitors from all around the world enjoy our facilities. It is not uncommon to begin your day by having a fascinating conversation with travelers from other countries while enjoying your morning coffee. Some guest comments are: "Thank You for sharing your home and a bit of yourself with each of us," "Best hostel I've seen," and "Both Cecilia and myself were enamored by the charm, history, and overall serenity of the South Cabin and vicinity."

For outdoor enthusiasts, a variety of equipment may be rented. This includes, but is not limited to, items such as mountain bikes, canoes, and backpacking equipment. Cross-country skis, poles and boots as well as snowshoes are available for use in June at Logan Pass on the Continental Divide in Glacier National Park.

All guests may use the amenities of the hostel. These include the living room, shower, and kitchen and refrigerator facilities.

Your friendly hostelmeister is Oliver. He has traveled the world extensively and understands hosteller's needs. He is fluent in English, German and sometimes Italian and Spanish. Always check in to make sure we are open in winter, Oliver sometimes takes off on his bike...

Note: Please make sure to call ahead, check for the road conditions and make reservations especially in the winter. Special arrangements can be made for the Charlie Wise Homestead Cabin in winter at Square Peg Ranch with adequate notice.

Hike or backpack along Glacier's Continental Divide or the forested trails of the Whitefish Range.
Ski Logan Pass in late June. (Cross-country skis and boots may be rented at the hostel.)
Bicycle up from West Glacier on the inside park road to the hostel, then explore Polebridge and the surrounding area.
Canoe, raft, fish or swim the federally designated wild and scenic North Fork of the Flathead River (class I, II and III white water) or beautiful Kintla and Bowman Lakes.
Help with trail maintenance, go on a hike or attend one of the other activities sponsored by the North Fork Preservation Association.
Winter

Supplies
Bring your own grub or purchase your groceries at the historic Polebridge Mercantile. Stop by and say hello to Stuart and Flannery, have a cup of coffee, and buy some of the bread and pastries that Flan bakes on the premises.

The Northern Lights Café, next door to the Mercantile, is open for dinner from Memorial Day week to the end of October and on weekends through the rest of the year, except for November and March. It has excellent food at reasonable prices. A real treat for all.

www.nfhostel.com
Phone Number: +1 (406) 888-5241
To add or correct information for this listing, please use the Listing Correction Form.

Reception Hours: when we are around