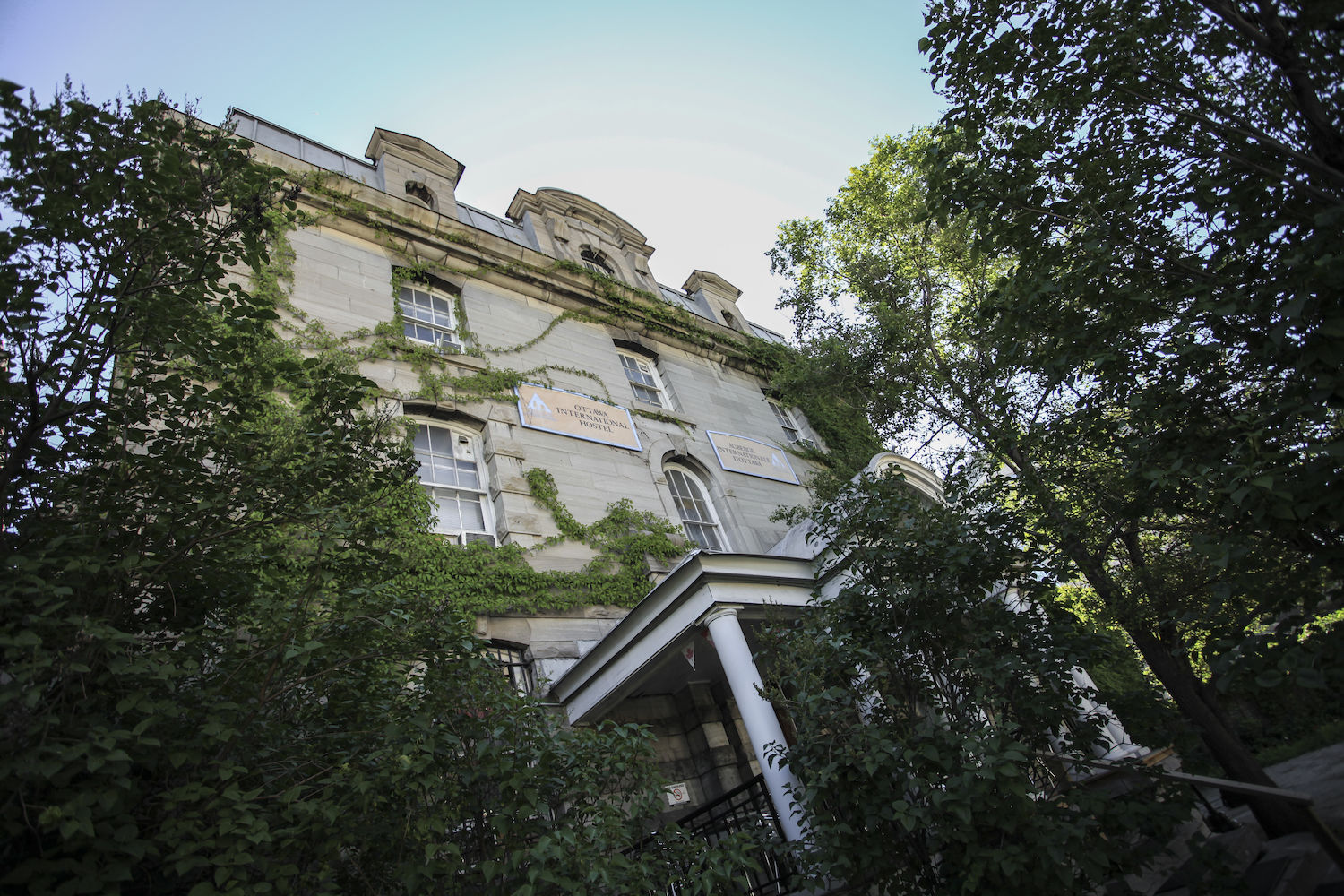 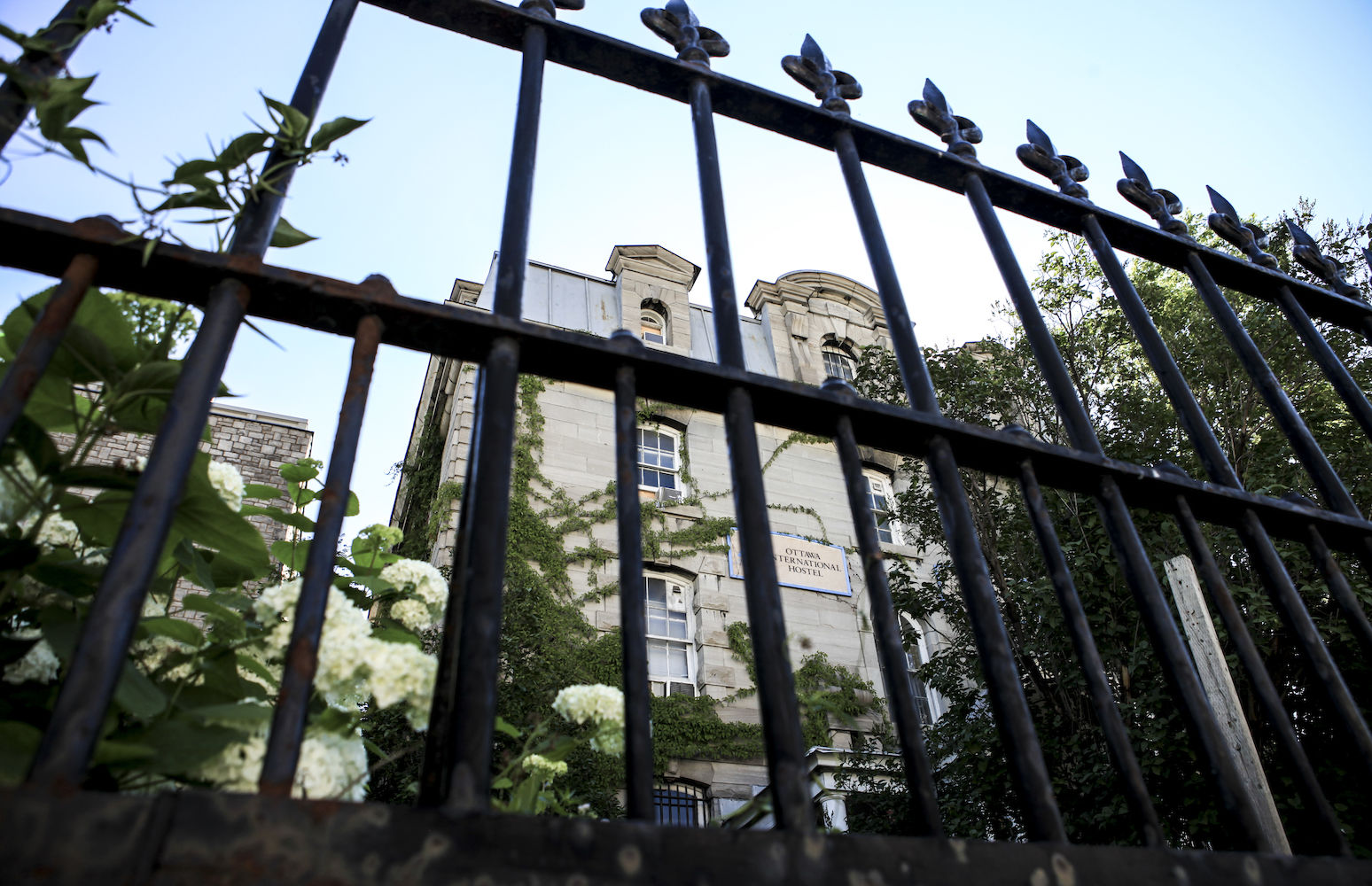 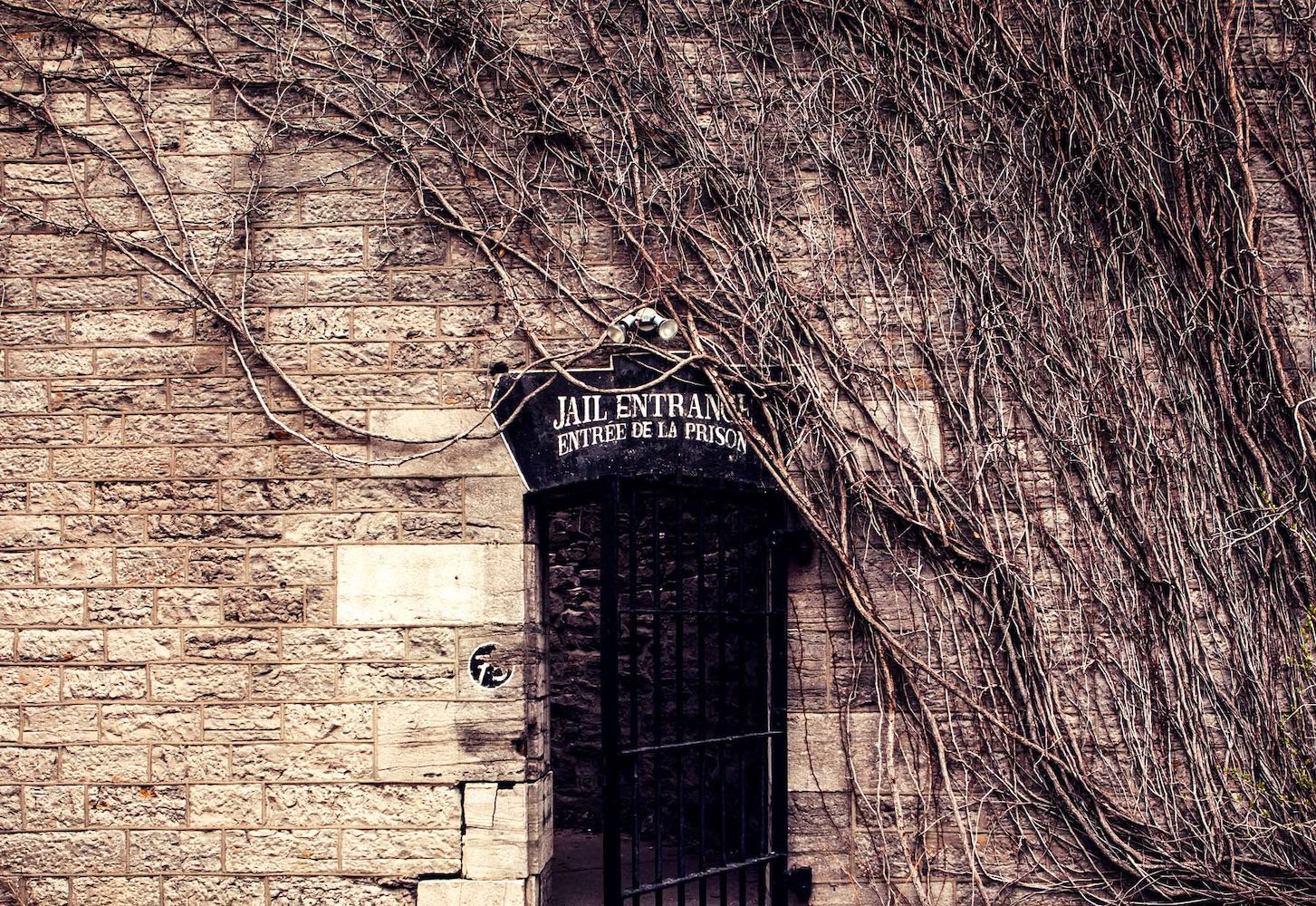 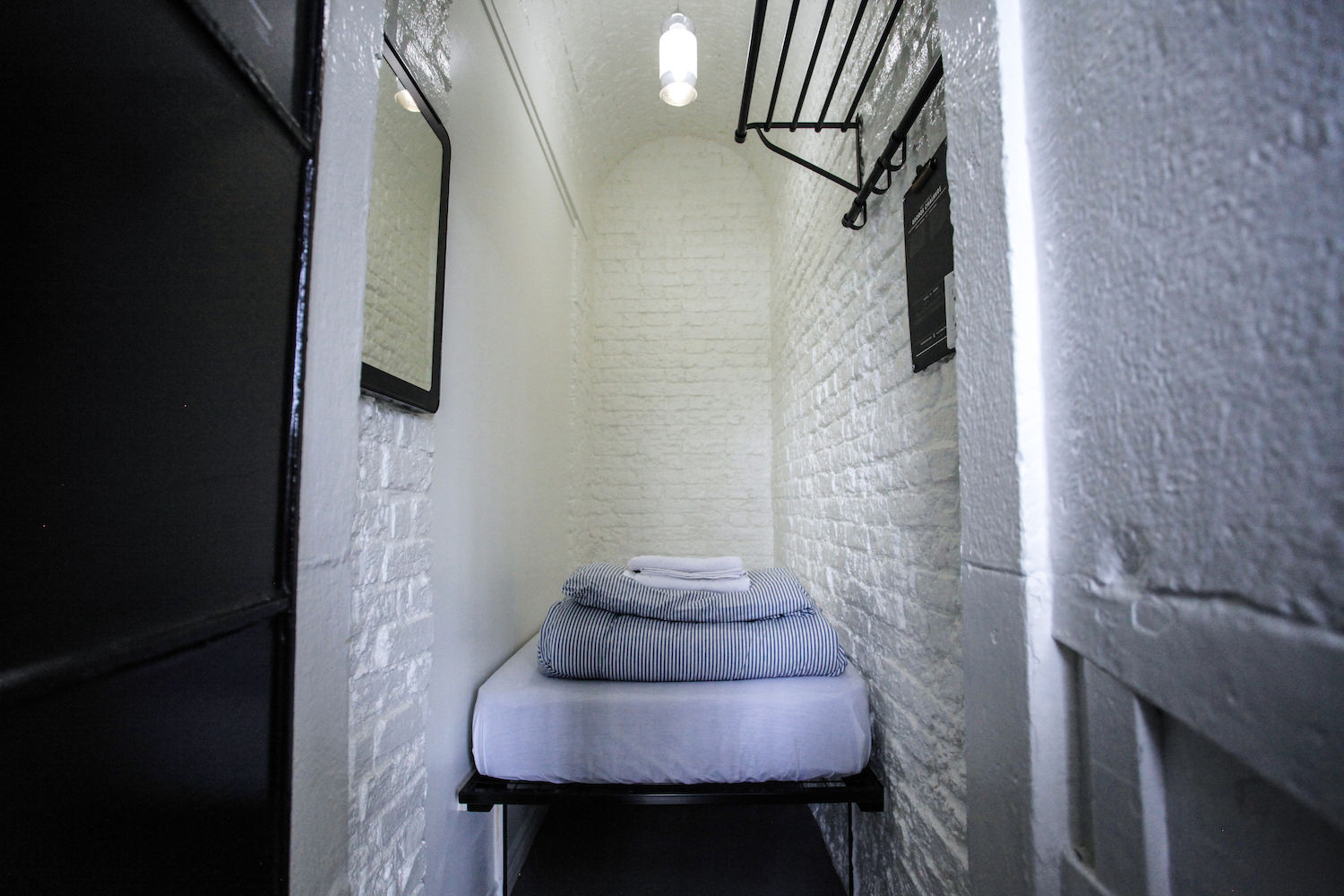 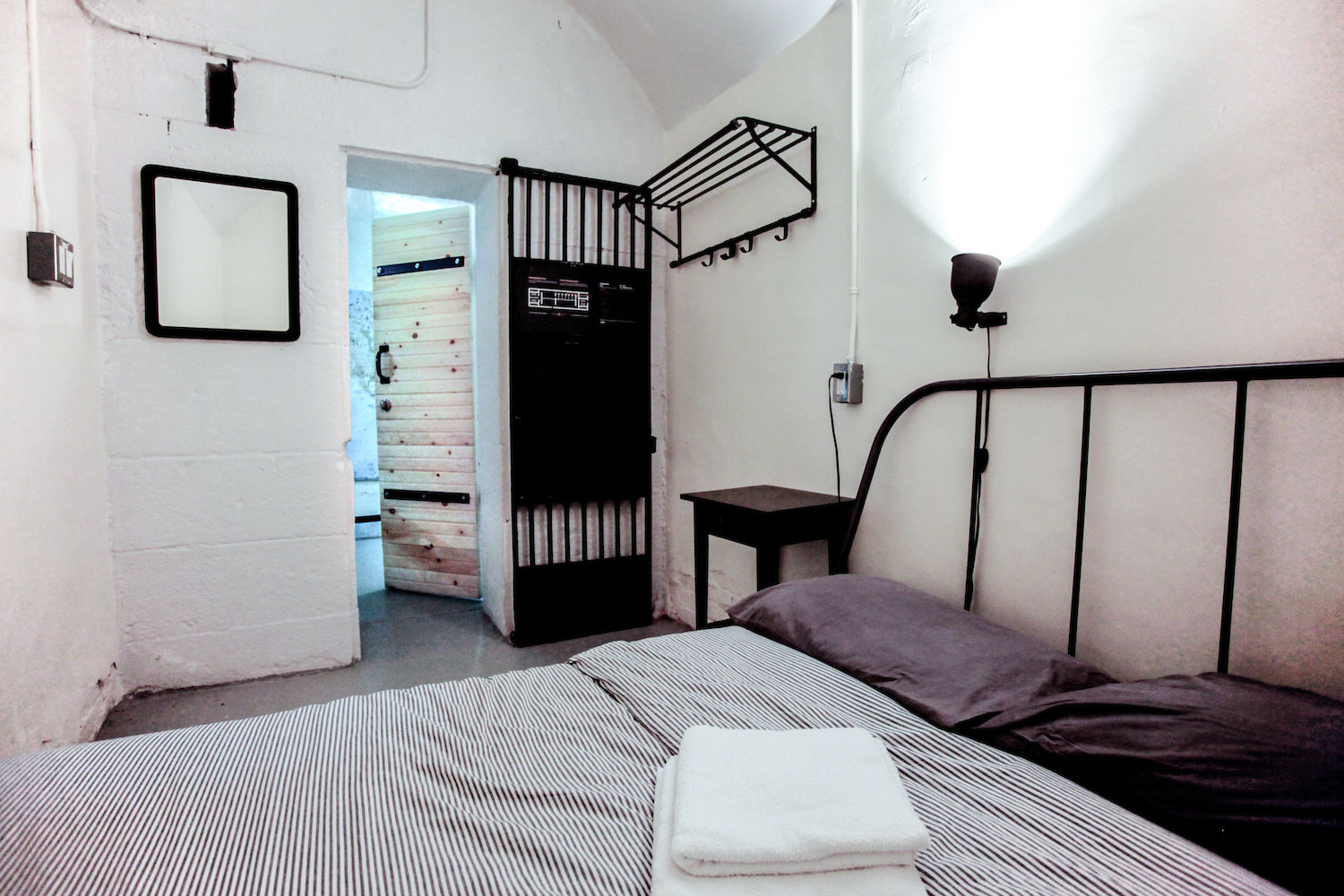 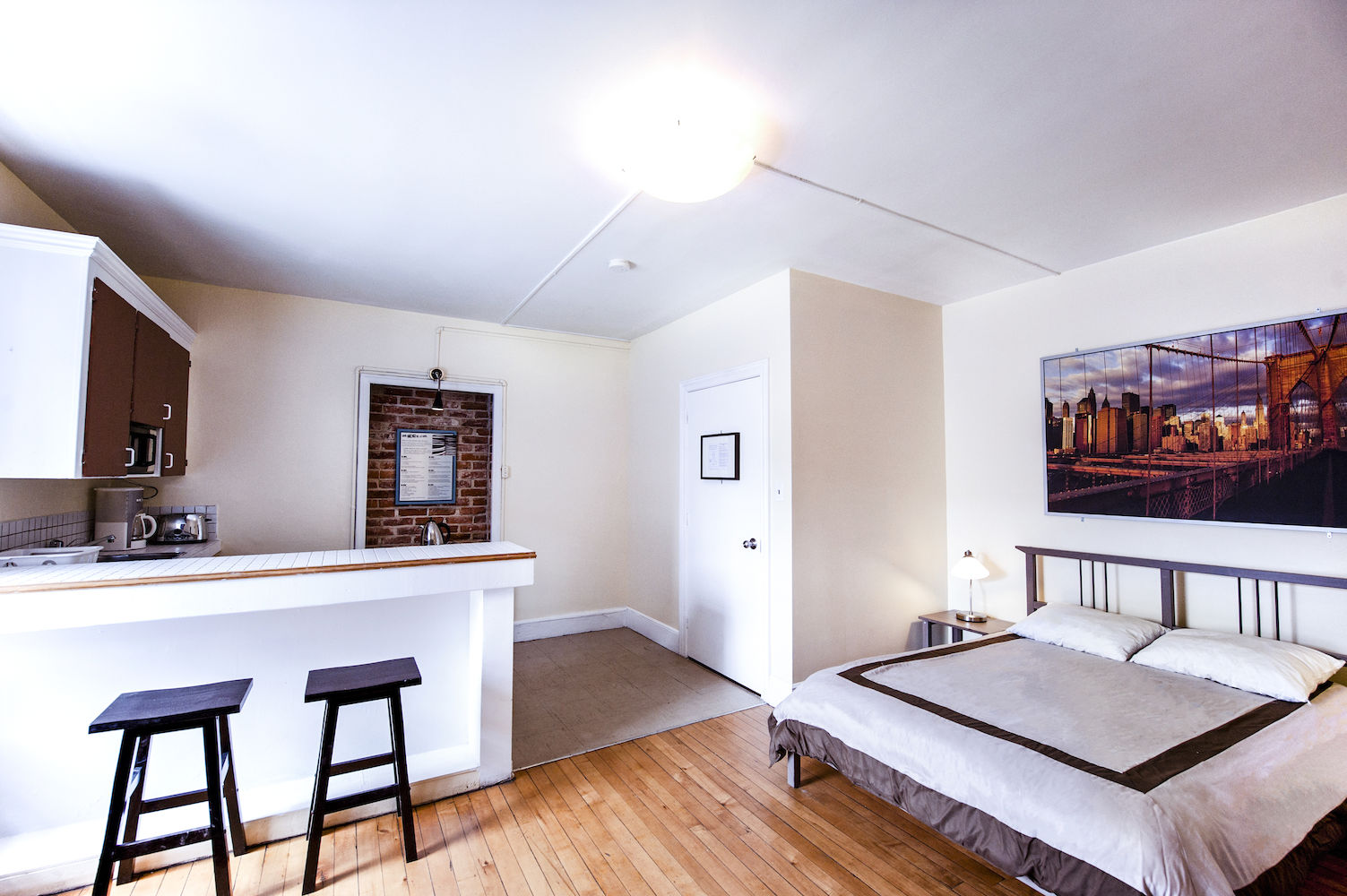 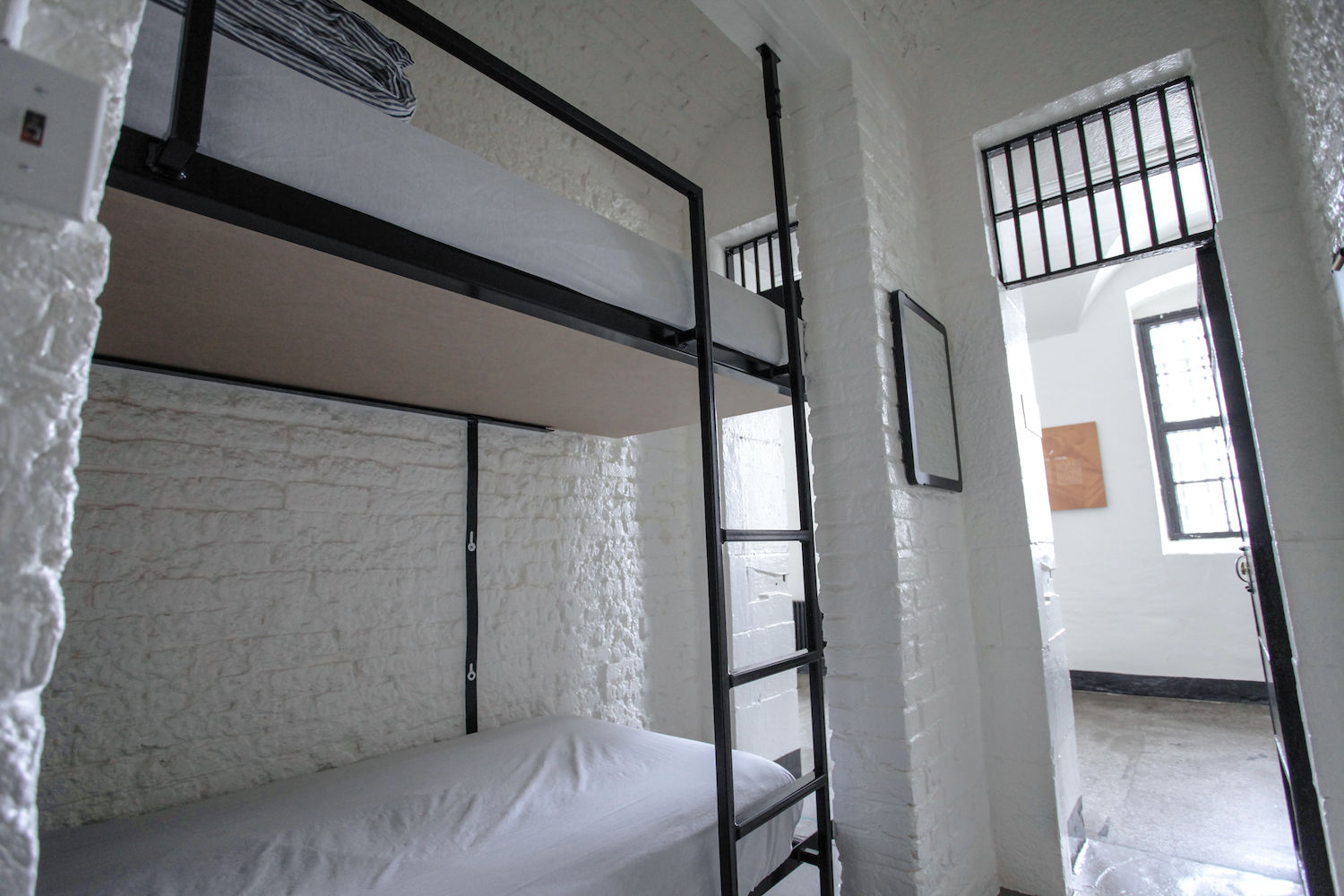 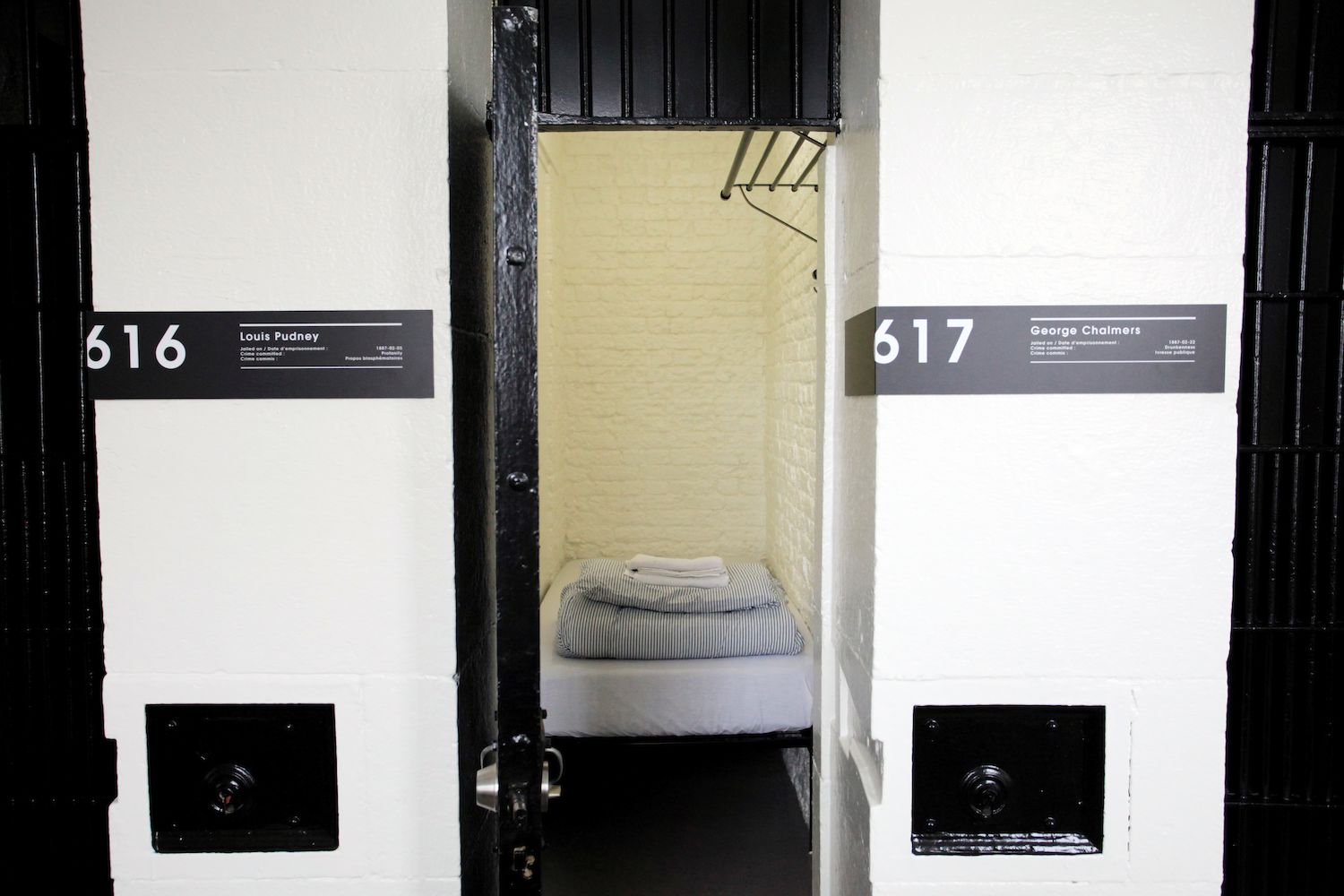 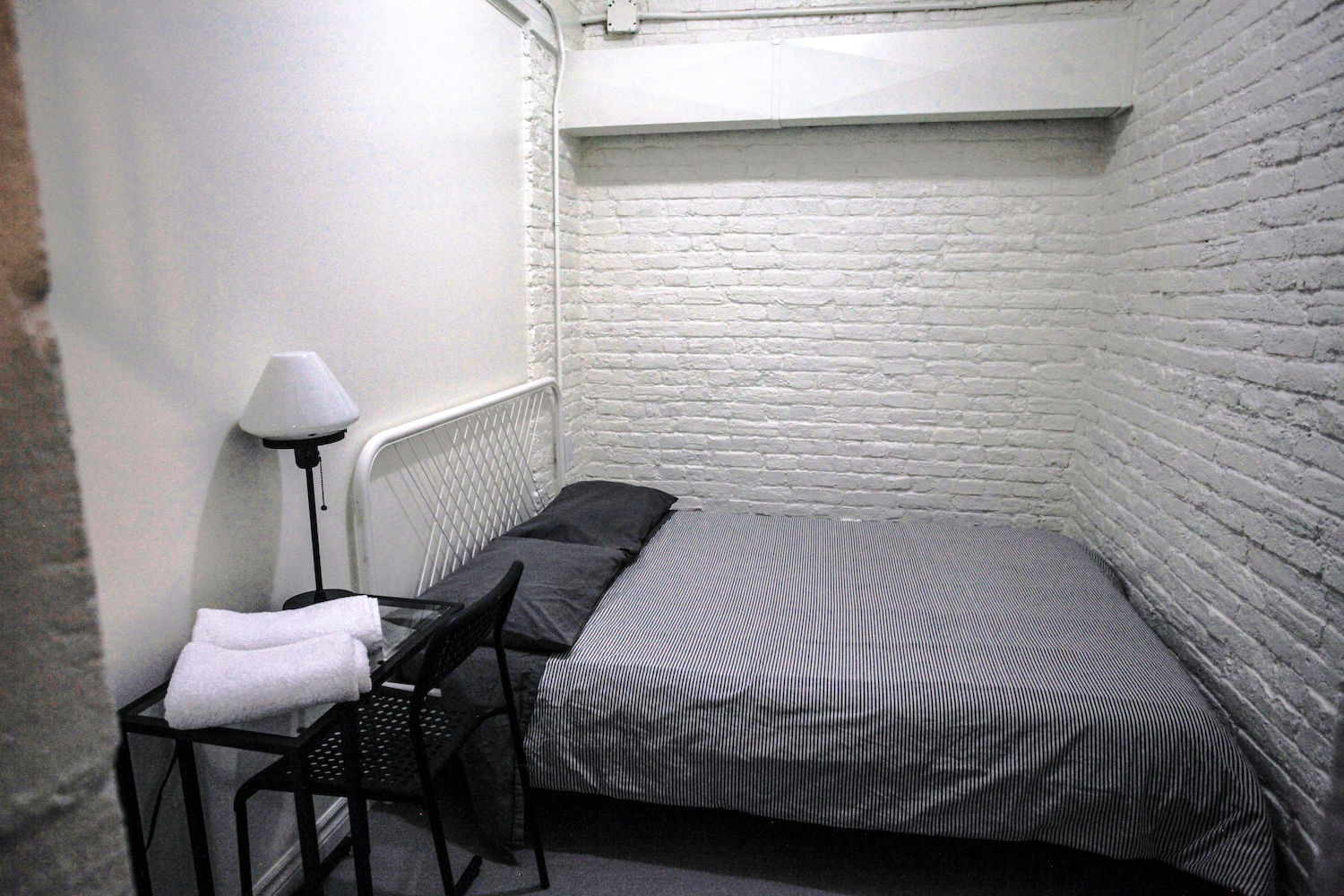 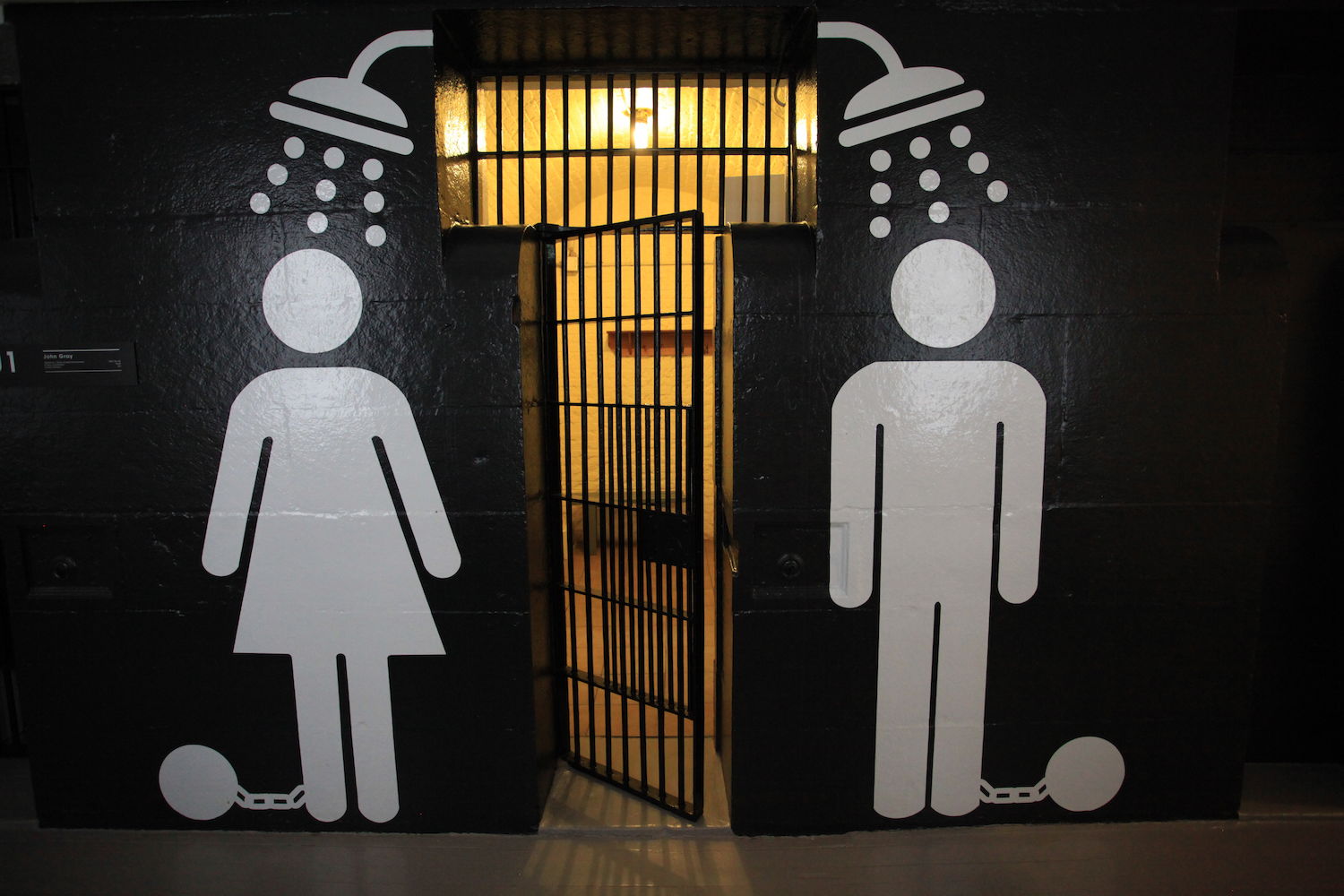 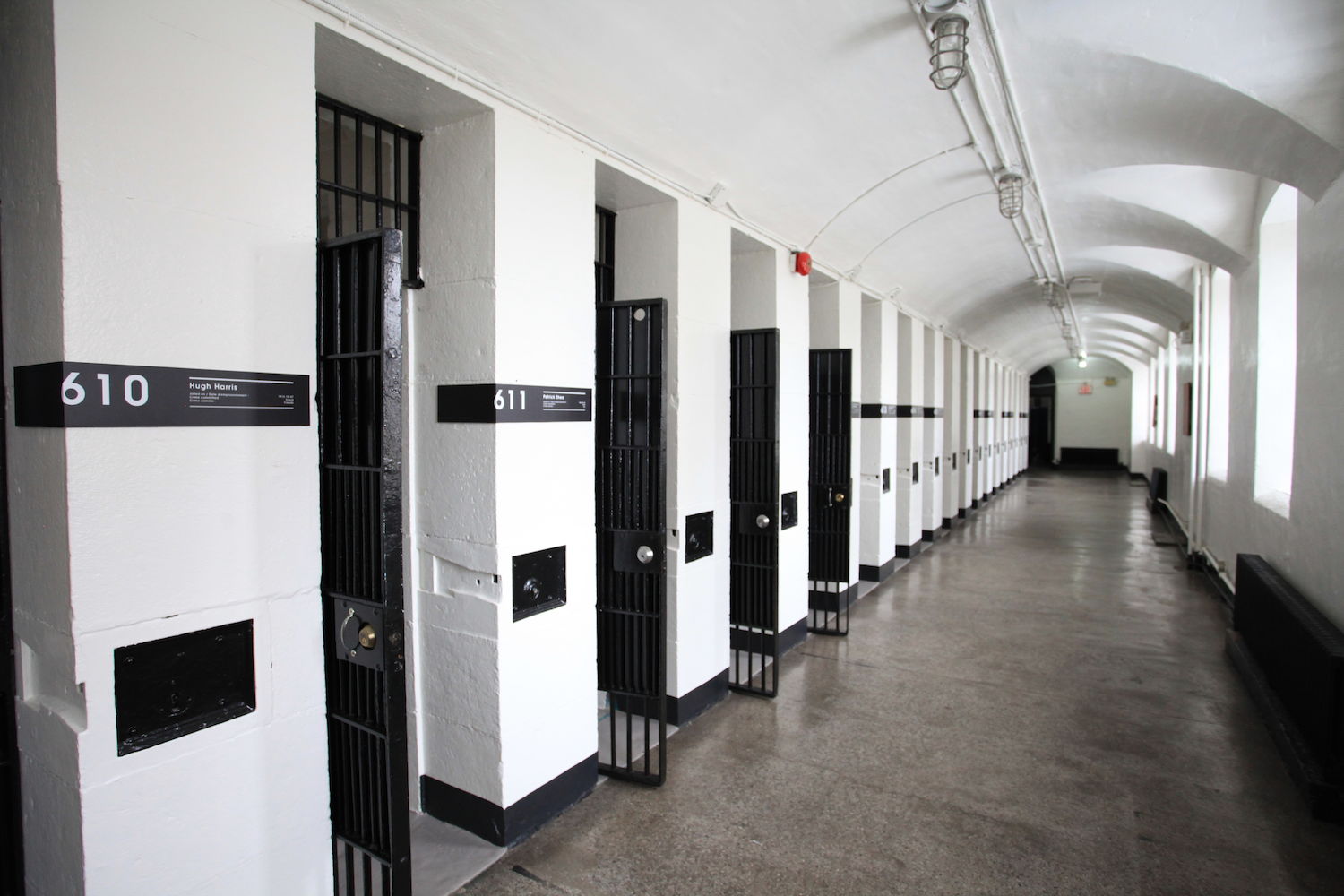 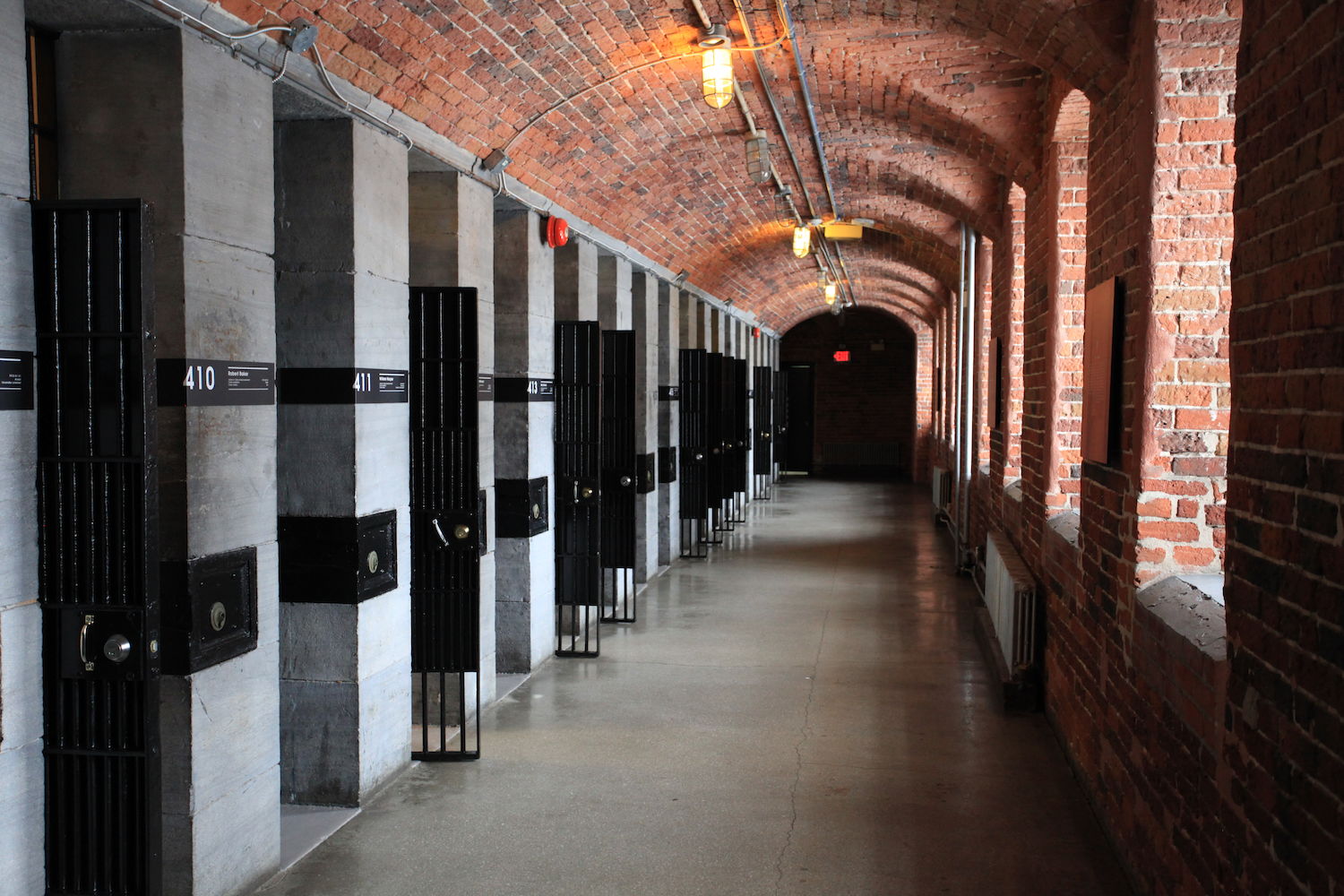 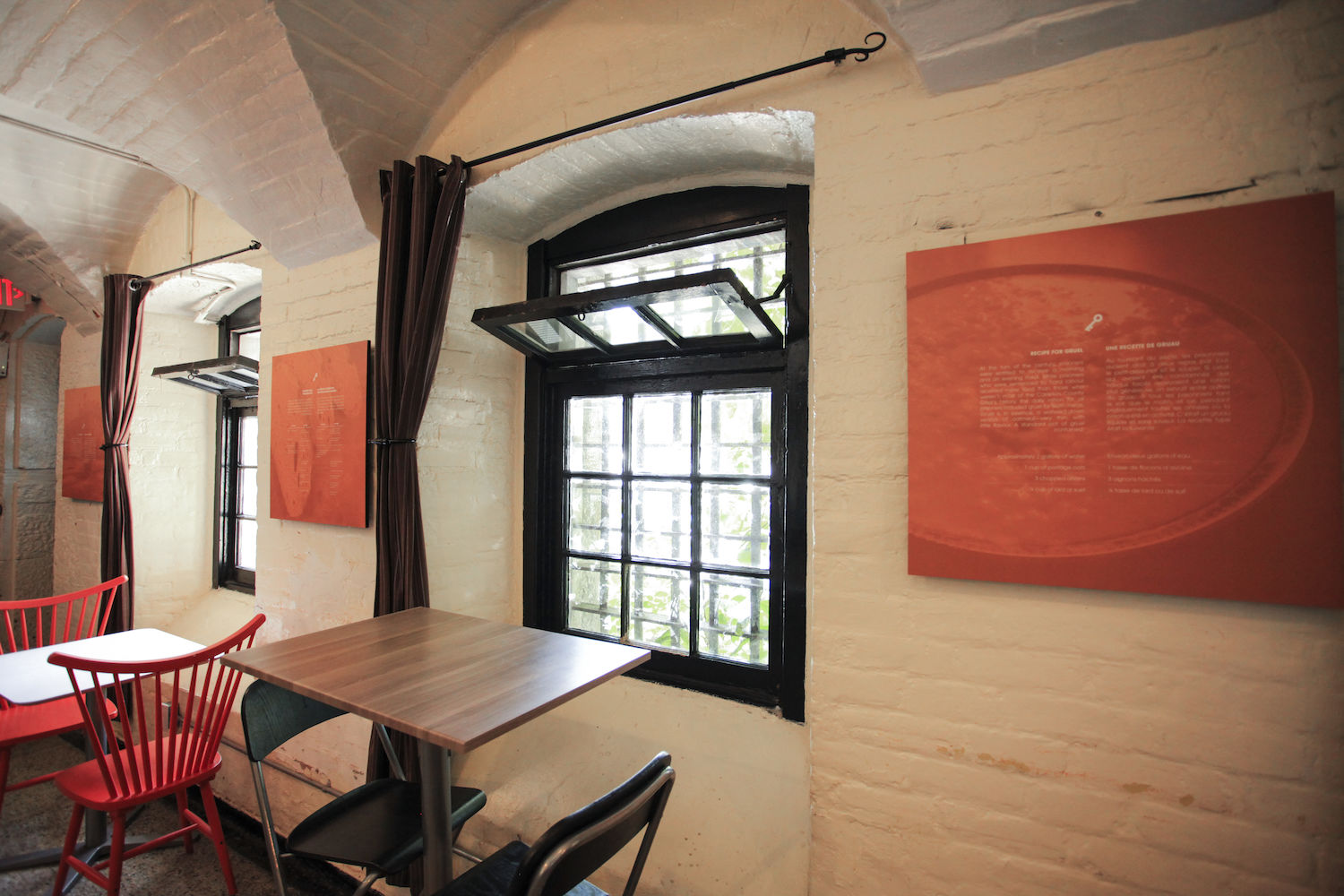 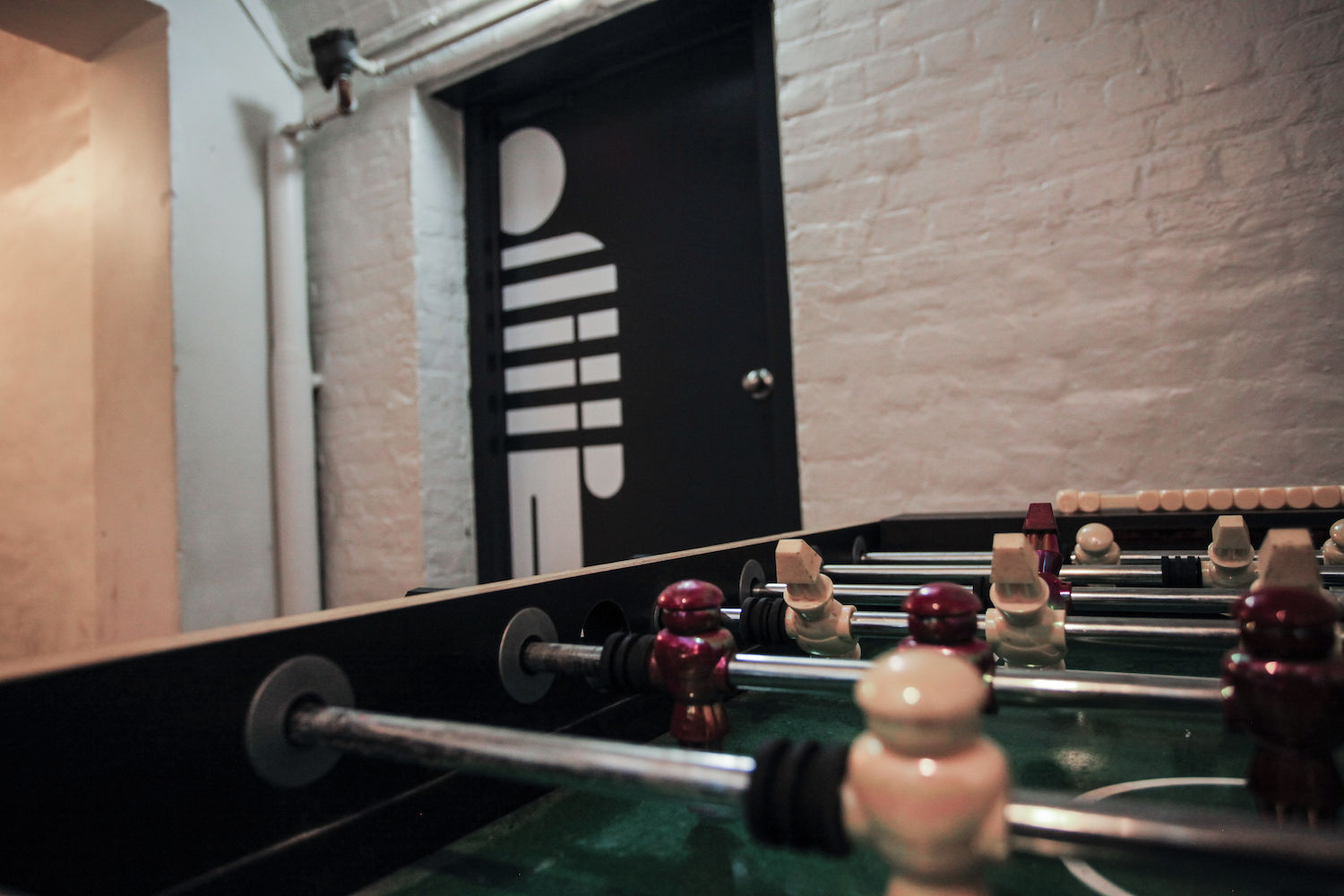 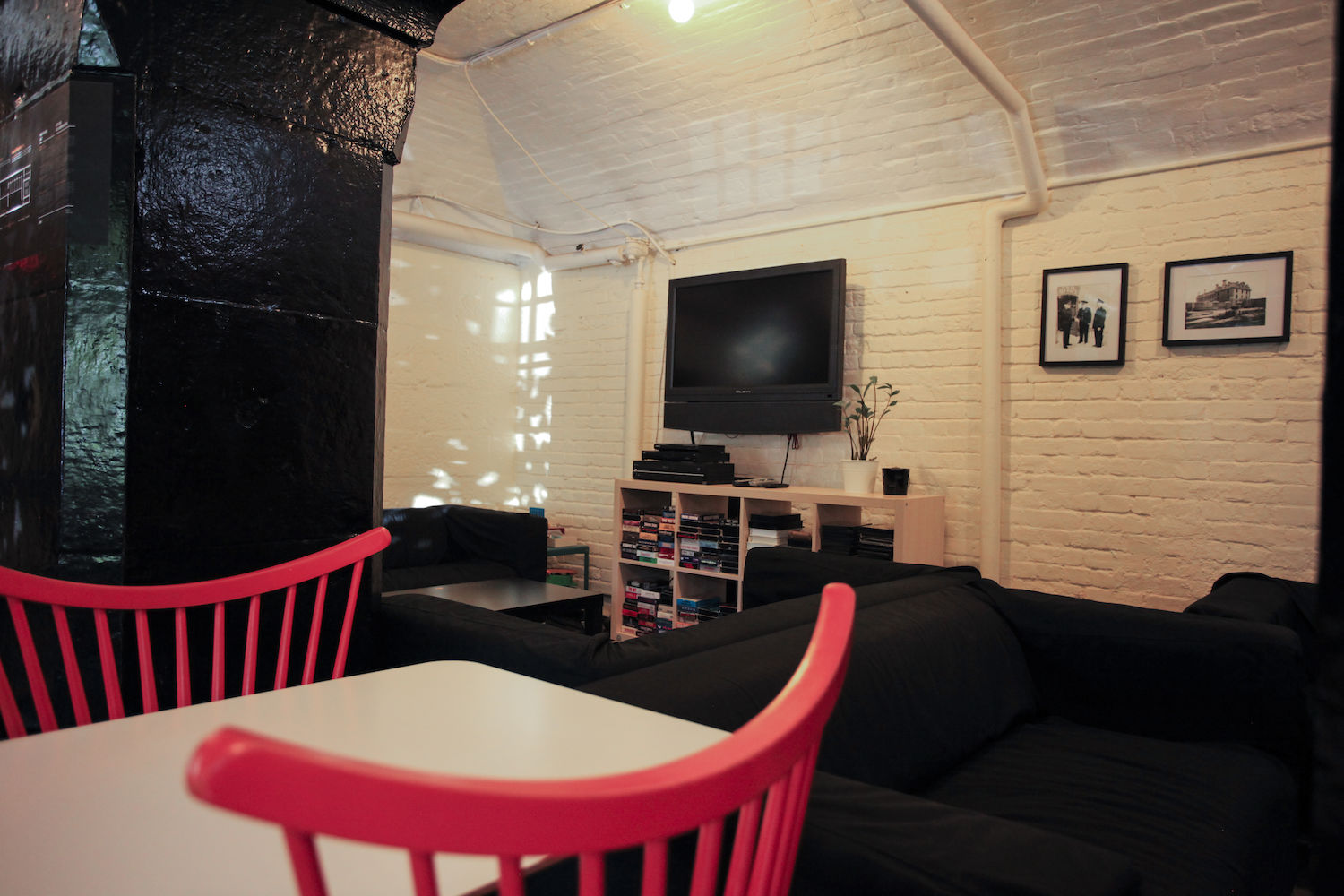 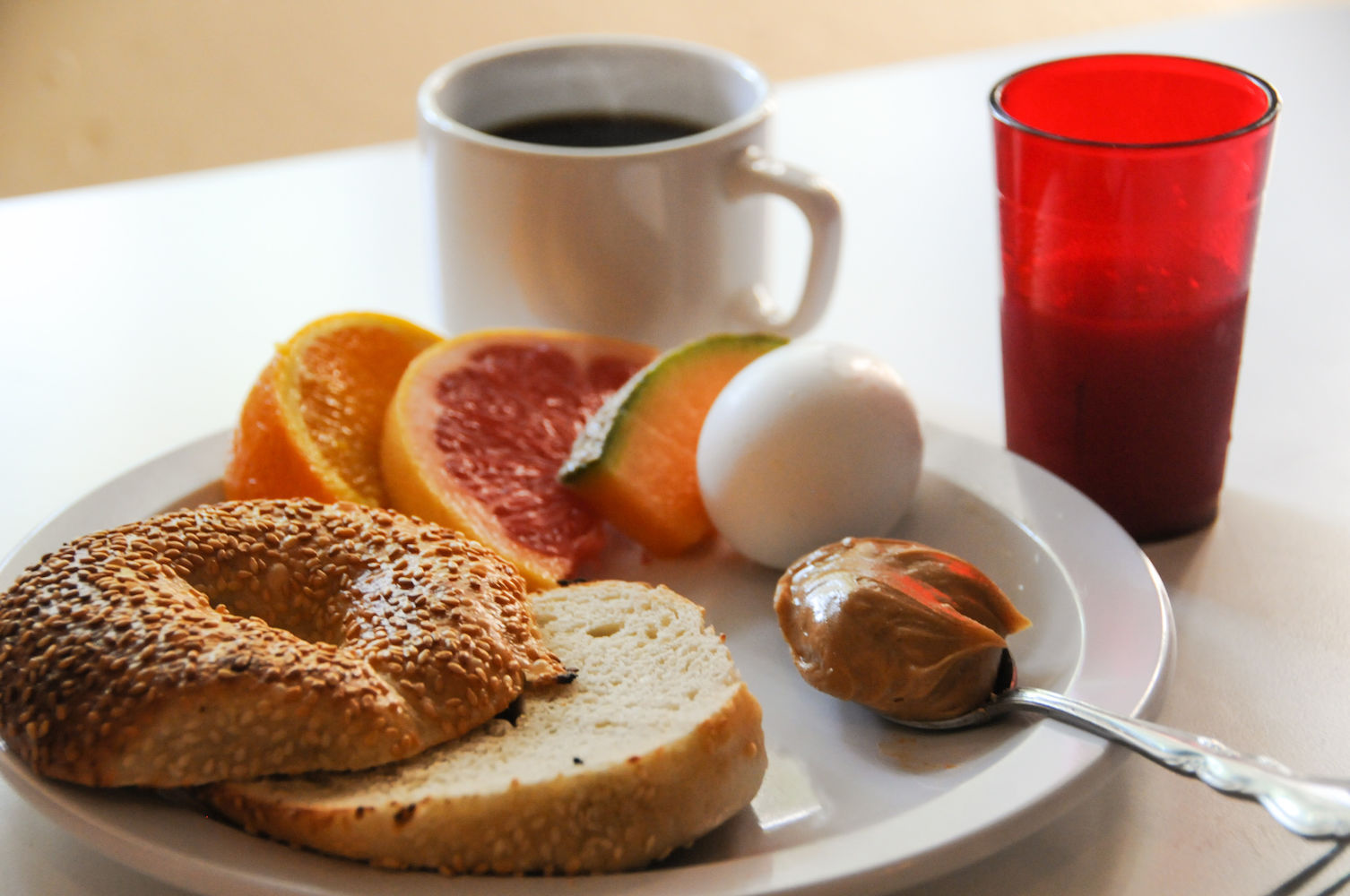 Here is a video of HI Ottawa Jail Hostel. The video gives you a better understanding of what you can expect.

www.hihostels.ca/ottawa
Phone Number: +1 (613) 235-2595
To add or correct information for this listing, please use the Listing Correction Form.

While tours of students were being conducted in the hallways, I was laying on a 3 foot wide cot in a windowless cell that measured 3 feet wide by 9 feet long and about ten feet high. With only a 3 foot square space at the head of the tightly squeezed in cot where the exit was a barred gate, I came to realize in a small way what prisoners were subjected to (according to one of the information panels displayed in the hallway) 10-12 hours each evening and night before being released to a courtyard for their daytime sentencing. Of course, I could leave at any time -- they could not. I was free to experience a small portion of what they were subjected to against their will. Were they criminals who were judged guilty of some crime against society? no doubt. Did a merciful and restorative process address their misdemeanor? no indication of that in the least. I recommend the experience, not for the savings at an economical international hostel nor to enjoy the generous and variety-filled breakfasts each morning -- but to realize that Canada has its ghosts and we do not have to go beyond the nation's capital to relive in part this horrid history. It is humbling to encounter within oneself shame of the past and pride of the present combined with commitment for a better future all at once. While the slogan painted in one of the bathroom stalls -- "No Prisons" -- may not be the answer, restorative prison programs certainly should be a goal.

I liked to stay at Jail hostel. It was good. I already expected a facilities wasn't new or very clean before I booked it. But it was comfortable to stay there. Especially, the staff's attitude was good. When I left there, it was some happening in Ottawa. He worried about a people who were stay as a guest. So he drove them to their destination like museums.

I enjoyed staying in a former jail cell though it won't suit everyone (especially if you have a lot of luggage). The music from the bar can be pretty loud although it didn't really bother me. All the facilities were fine. The staff were friendly and helpful, and I met some good people there.

I stayed in a private room with my gf on the 9th floor. I must say that this is the filthiest HI I have ever stayed in. There was one bathroom on the 9th floor and that was always dirty with water on the floor and always busy. I have to say I am not picky and I have vast experience hosteling, but this one was REALLY bad. If you choose to stay here use the showers on the 4th floor at 6am or earlier. I tried every other floor that had showers but were busy or under construction. So in summary NOT ENOUGH SHOWERS. As for the bathrooms, well lets' just say I had anxiety of not being able to find a clean toilet to use so much that I decided to use public washrooms in the shopping centre next door. Same situation with the toilets NOT ENOUGH and dirty. I also wanted to comment on the 7am fire alarms. They were false alarms (twice) thank goodness, because if they were real I doubt we would have gotten out alive. There is one way out here and room had bars on the windows (it was a jail after all). The staff were unapologetic and really not helpful. All in all, I'd rather save up for a hotel then stay here. Or try some other hostel in Ottawa. It's a shame to have HI brand associated with these people.

HI - Ottawa Jail Hostel has to be one of the coolest hostels in the world! Who doesn't want to sleep in their own jail cell? The formerly condemned Carleton County Jail used to house petty offenders, those on death row, mental patients, and other random guests. Since being condemned, the building has been converted with minimal renovations to the building structure into a hostel.

Right opposite the Rideau Center and close to Parliament Hill, Byward Market, and most of the museums, the location of this hostel is perfect. It is close to everything you need.

The rooms are converted jail cells equipped with their own bars on the doors, with the exception of a couple of floors (the top floor has dorm rooms converted from the part of the prison where the women were housed separate from the men). Here the rooms are fairly standard, normal dorm rooms, but with a few bars on windows and a sink in the corner. If you have your heart set on sleeping in an actual cell with bars on the doors, then make sure that you double check when booking.

The bathrooms are also converted jail cells. You can shower with your own view of the bars on the windows. Toilets are separate from the showers. They are all clean and well-maintained.

The hostel is equipped with a very modern and clean kitchen with all facilities, including a coffee machine. Mugshots Bar is downstairs -- you can go and socialize over a drink or two and have your photo taken on the lineup. They also have books and games in these common areas for people to use as well. Free daily breakfast is served in the bar also.

he hostel also offers laundry and overnight parking (for a per-night fee, you can park your car out back in the old exercise yard of the prison, so that you don't have to worry about the hassle of downtown parking).

The hostel runs nightly tours of the closed-off eighth floor of the building, where you will find cells of many of the inmates still in their original condition, shackles and all. You can get tickets from the front desk and it is well worth the trip through the prison to hear about the prisoners, the escapes, those on death row, and all of the stories of the "weird" stuff that happens in the hostel (some people believe the hostel is still inhabited by the ghosts of those who have passed). You can also do ghost tours around the city of Ottawa, too. Ask the staff at the front desk -- they are super polite and helpful.

Definitely stay here. The place has an amazing vibe and as far as cool hostels and different experiences go, it is at the top of the list! 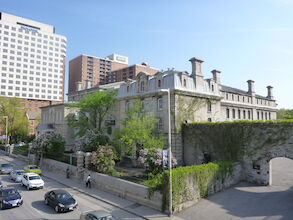 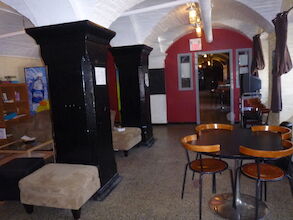 I stayed in one of the male dorms for 4 nights; couldn't have hoped for anything more. Knowing it's a haunted old jail make me expect dark and worn out rooms, with spiderwebs and bloodstains but I was nicely surprised. The entire building is perfectly clean by any standard. The beds were comfortable, although a bit noisy when you move around. The lockers in the room were a good size, and there were larger ones in the hall (but only some of them seemed to be free). The bathrooms are more modern than the cell, and were also clean. I think this is one of the few hostels I've seen that has a dry place outside the shower stall with enough hooks and shelves for clothes and getting changed. The only downside to the building could be the noise; the design of the building forces noise to travel so that prison guards could hear inmates whispering quietly in their cells. The door is solid, but the space above is just open metal bars. There was a background noise of what I guessed was distant water dripping and something like footsteps. It's really just a bit creepy at worst, and in the end, its much better than many other hostels (and hotels) with heavy doors that you hear slamming from everywhere in the building all night long.

I did not stay over night. however my friend was trying to plan a stay over for her birthday. they said that they would rent her a room, and that it wouldn't be any problem. however when she tried to call the manager back to finalize the booking, he wouldn't answer, so she kept calling, till eventually she called the front desk and asked when he would be in, they said that he had been in a lot of meetings all week and that was why he hadn't been answering. a couple minutes after getting off the phone with them she got a text telling her that they were no longer able to host her party and to stop calling. very rude, couldn't even call her and tell her.

Visited with my boys for one day March Break 2009. The experience of the tour was so so. The tour guide was a bit creepy and kept looking at my 2 and half year old when he was fussy. All in all I got and gave the kids the experience I intended.

How is HI Ottawa Jail Hostel rated on booking websites?

See all 5 hostels in Ottawa

See all 5 hostels in Ottawa