5.6
1,023 Reviews
Good Location
We compare all hostel prices in Cairns for you. So you save money and time!

It is the only way to book Central City Backpackers - Cairns

How is Central City Backpackers - Cairns rated on booking websites?

Caravella Central Backpackers is a medium backpackers' hostel in a multi-story, street-side cutout near the heart of Cairns, Queensland. Caravella caters primarily toward backpackers hoping to capitalize on the multiple tours and excursions, which Cairns has to offer.

The hostel is located only a half-kilometer from the famed Esplanade boardwalk, which is located adjacent to Cairns' outdoor swimming lagoon and oceanic bay view. Getting to the hostel is relatively simple, with Greyhound buses stopping near the Esplanade and the train station located nearby as well, the walk from each station respectively takes less than ten minutes. Prior arrangements should be made when arriving by air, however, as the Cairns airport is located around six kilometers away by parkway. The proprietor can assist with these arrangements. Local eateries are strewn around the immediate area, and some of the most popular nightspots are located within minutes of Caravella.

The majority of accommodations here are dormitories (both air conditioned and not air conditioned). Each dorm has a window without en suite restrooms, although there is typically a dorm reserved for females only among other coed rooms. The beds are durable, and comfortable enough, although the bottom bunks are uncomfortably short and limiting air circulation to some degree. Non-air-conditioned rooms are equipped with a ceiling fan, which proves rather ineffective at moving air to any significant degree. The windows are restricted to opening less than ten centimeters, creating an incredibly unpleasant atmosphere for sleeping at nights during the majority of the warm season. The rooms are sparsely furnished, with only a small, single refrigerator provided to each room to serve as a night stand. Four electrical outlets are provided in each room, although one is reserved for powering the refrigerator. A single sink is provided in each room.

There are two shared bathrooms per floor, each equipped with a toilet room and shower that opens to the single sink area. The shower head is notably short (approximately significantly under six feet), and cramped conditions in the shower are further agitated by the lack of any enclosed changing area. There is no door to the bathroom, so it is potentially possible to look down the hallway and see travelers checking in as you attempt to reach the towel rack after a shower.

Reception is open only from 8 a.m. to noon and 4 to 8 p.m. If you are arriving outside of these times, notify the reception, and you will be given a code to be able to retrieve your key to your room from a safe under the reception. Laundry facilities are available, although they are available for use only during daytime hours. A section of exposed stairway connecting the first and second floor operates as a social smoking area.

The kitchen is inadequately kept. Although equipped with sufficient equipment to operate, it always seems that there is never enough, which would be a particular problem when the hostel operates near capacity. The single sink has no garbage disposal, and as a result, is prone to clogging. A small book exchange is provided near limited cupboard space within the kitchen area as well. The hostel is entirely self-catered.

Caravella Central Backpackers is a fair accommodation for the minimalistic traveler to Cairns. It provides the necessities to hold over the night before a day on the reef or in the rainforest, and the low cost is quite appealing to many travelers. Caravella's location is one of its greatest assets, with activities of all kinds accessible within a few minutes' walk from the front door. Travelers should be wary of staying in the non-air-conditioned rooms during the summer months, however, as the lack of effective ceiling fans and restricted windows in the tropical climate create an evening that is not to be enjoyed, only endured.
Photos taken by the Hostelz.com reviewer — Genuine photos you can trust. 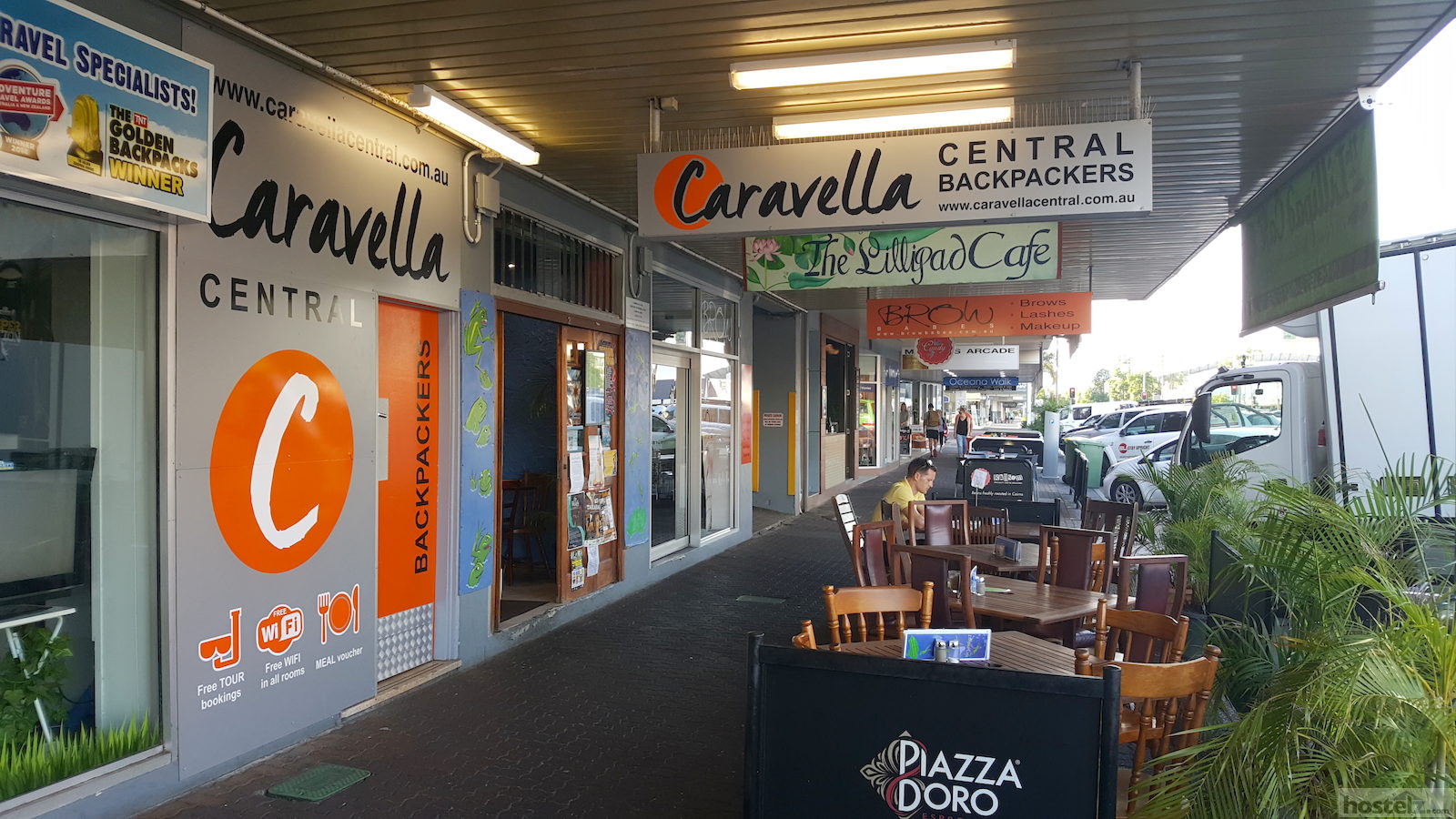 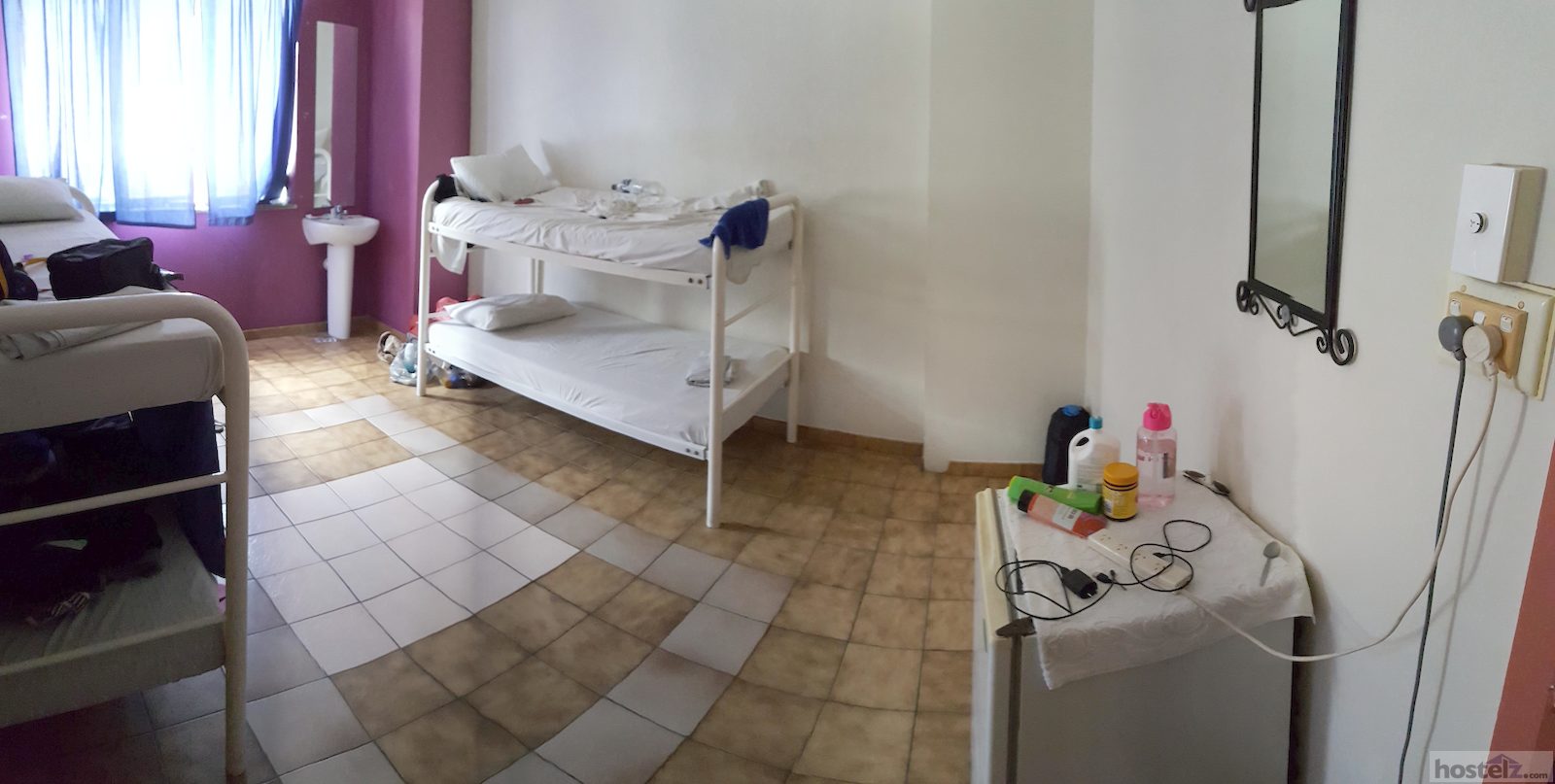 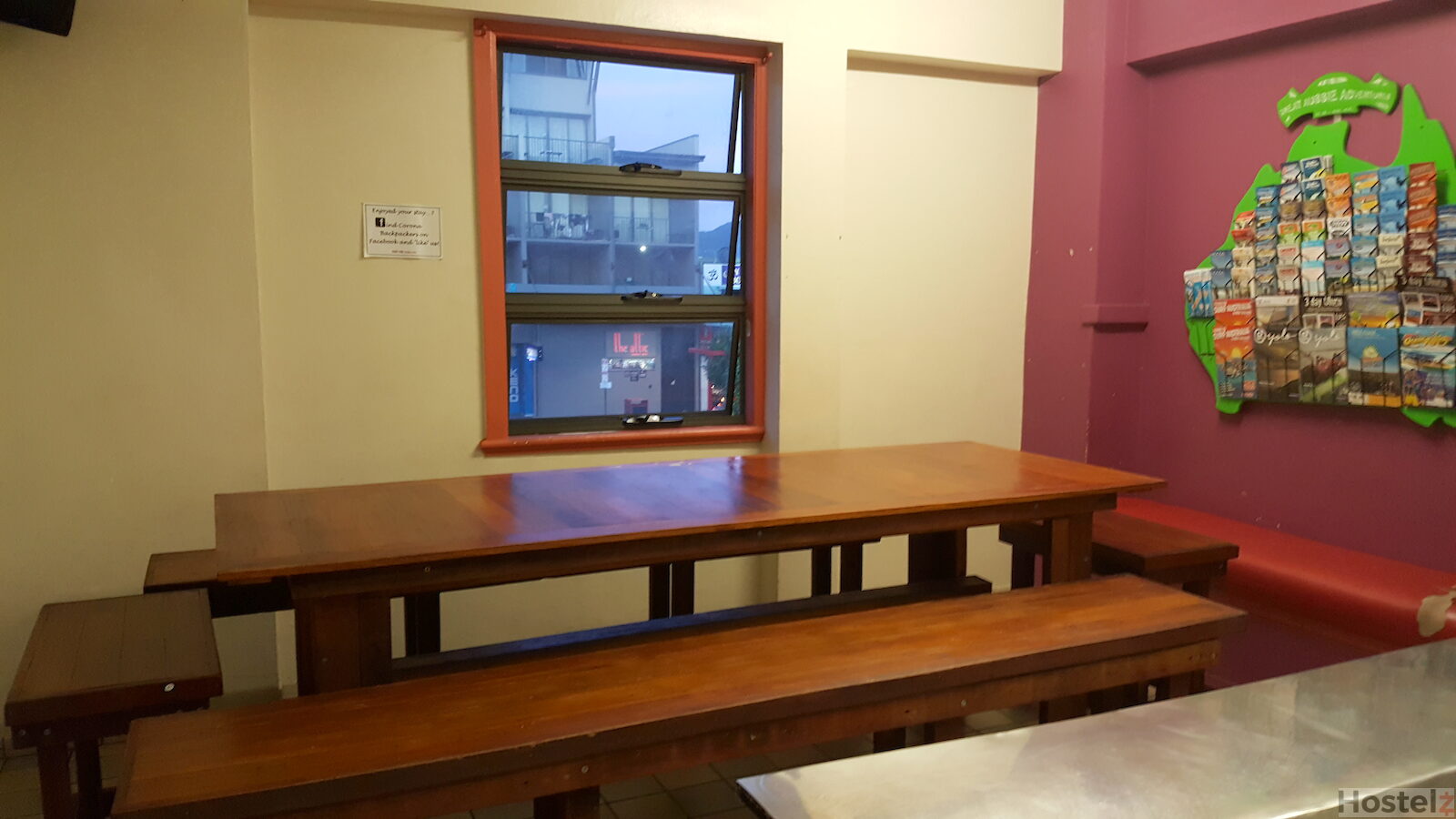 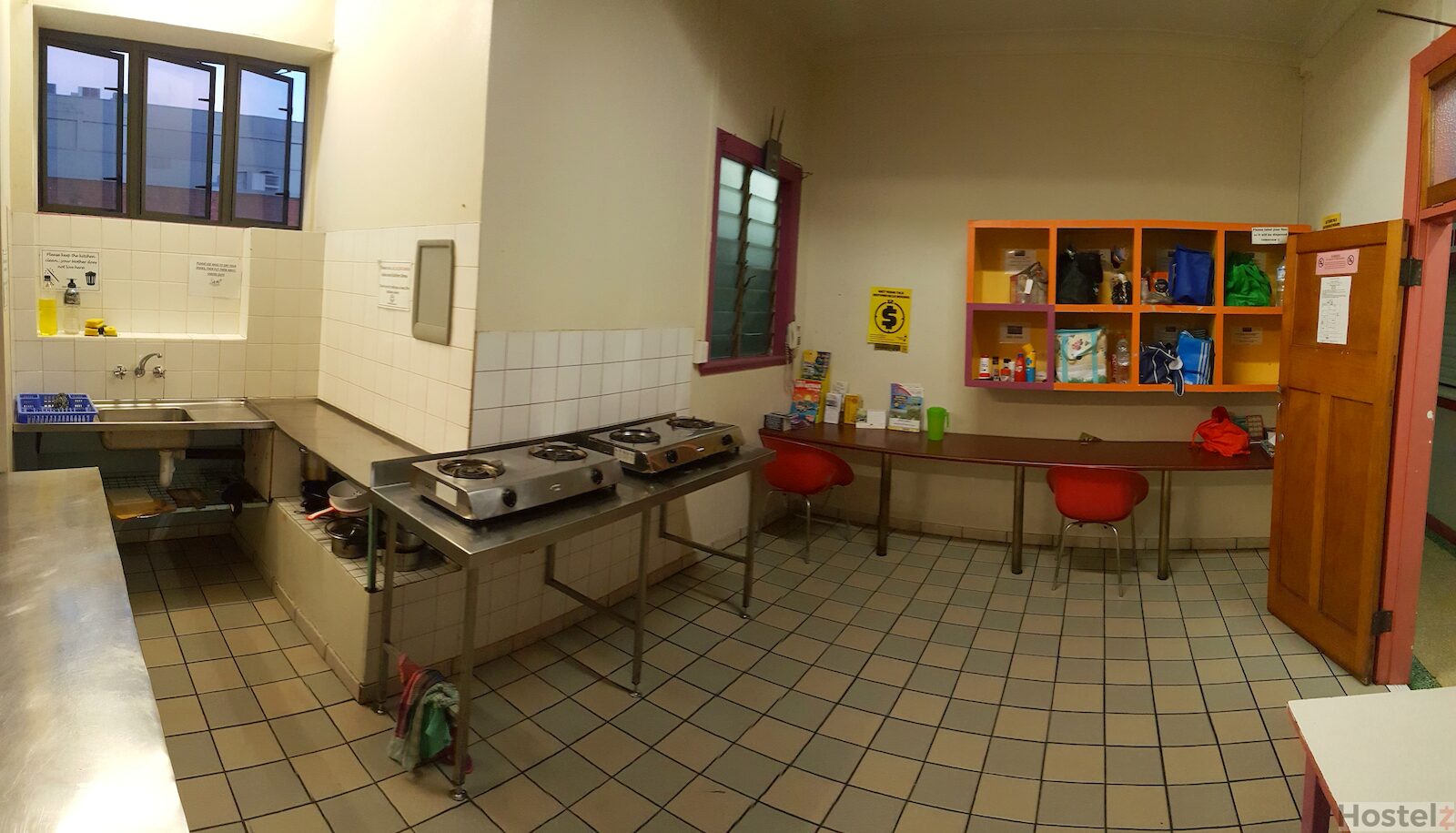 The HK reception was so nice. He gave all the information about Cairns to us. Besides, i think a night shift old man wasn't do anything until night. Every night was too noisy because somebody talk too loudly at the stair. By the way, my room also have been broken the window because of somebody played until night and drink a lot. But the old guy didn't do anything on it. Overall is very good, the bedrooms and bathrooms even the toilet clean everyday. So, that's the reasonable price and get the comfortable living.

Corona backpackers is a value for money backpackers located in the heart of Cairns city central. It is spread over two floors, each with their own kitchen and bathroom facilities. The major positives are its excellent location and friendly, helpful staff

The hostel is in a perfect location and is literally a minute's walk from the main high street and pubs and a five-minute walk from the lagoon. It is also directly opposite the biggest backpacking resort in Cairns that also has a large nightclub. As the hostel is not easily seen at first, it is best to make your way to the resort and then cross the road.

The dorm rooms are fairly basic and generally sleep four people on bunk beds. The rooms do have their own fridge and also a sink, which both come in handy. The main problem with the rooms however is the lack of air conditioning -- there is a ceiling fan but the rooms still get very hot and stuffy when the weather is warm.

There is a genuine lack of real common spaces within the hostel unfortunately, except for a kitchen on each floor. These are generally only used by the travelers for cooking and are not really used for socialising as there is no comfy chairs or other entertainment in there. There is also no TV or internet facilities to use although internet access is available a minute's walk away on the high street. The place where travelers do tend to socialise is on the outdoor staircase, although this is not really ideal.

In summary Corona Backpackers is a very simple hostel that serves as a good place to get your head down for the night. It is very good value for money and you also are given a free meal voucher every night for the Woolshed pub, which is where everyone goes. The main positive is its excellent location, which is very handy, and also the owner who is very helpful and offers good discounts on any tours.

Coronas is set in a great location and at a very affordable price, i highly recommend it to anyone who is a budget traveler who loves to party and meet new people along the way. The staff are ultra friendly and look after you well with a free meal at the woolshed and tour bookings.

Wonderful place! It's very basic (no common room, no TV lounge, no computers), but it's so nice and cosy and everybody knows each other. Staff are very friendly and helpful and it's $16 a night only, you can't beat that! The best place to stay in Cairns. Try to get a bed on the second floor.

Wow, what a wonderful place! Corona has a nice, familiy-like atmosphere and you'll feel like home there. It is extremly basic, but also extremely cheap! The rooms are quite spartanic, but they have everything you need, even a fridge and a basin. There are no air-cons, but fans are okay. The kitchen is sweet and clean. Unfortunately there's nothing like a common-room or a TV lounge, but you cannot expect more for 16 dollars a night. One star minus, because they just raised the price to 18 dollars a night... Still one of the best places to stay in Cairns. STRONGLY RECOMMENDED!

basic hostel. you dont need more than this. $15 for night. it's wonderful and fair price!

This is not the most luxurious but it's the nicest hostel I have ever been to. It is extremely cheap and the atmosphere is brilliant. The owner and the staff are so cute and I highly recommend this hostel to anyone who likes a homey atmosphere.

Great place, right in the center of town, with a nice atmosphere. It's pretty small and hence personal, Yup, it's definitely a cool place. It has decent sized rooms and a fridge also. The only downside is that there is no TV or relaxation room, but you are bound to meet people here.

(if you know the URL of their website, let us know and we'll add it)
Phone Number: (07) 40 415288
To add or correct information for this listing, please use the Listing Correction Form.

See all 28 hostels in Cairns

See all 28 hostels in Cairns