8.6
490 Reviews
Top Location
We compare all hostel prices in Wollongong for you. So you save money and time!

Keiraleagh Backpackers Wollongong is listed at the following booking sites:

It is the only way to book Keiraleagh Backpackers Wollongong

How is Keiraleagh Backpackers Wollongong rated on booking websites?

Friendly staff, good location. Not very clean and quite noisy.

Ok for one night, kitchen and bathrooms grubby. Noisy.

Could not stand it!

This place is no good. Staff don't seem to care about their guests, the place is an absolute mess, there are cockroaches and other insects everywhere and it smells of urine. I avoided showering or taking a poo because the bathroom facilities were absolutely filthy, I only stayed one night and that's all that I could take. The staff kind of seemed as though they were under the influence as well.

Had to stay somewhere else

I highly recommend anyone who expects a hostel to be of living standard to reconsider booking here. I stayed here (or was to stay here) in January '14. Here are the reasons I STRONGLY advise you to reconsider. The backyard area is where everyone drinks and plays music at night time, the problem is, the rooms are closely SURROUNDING this area, making sleep impossible. The kitchen had cockroaches crawling all through it. The place is incredibly rundown. There are holes in the roof; the shower lights don't work at all (so enjoy having a shower in the dark); the showers leak, making a safety hazard as the water puddles on to tiles that are not slip proof; there is no ventilation in the showers and the toilets, leaving mould and germs to prosper. The bunk beds are very unstable. They are so close to being on the verge to collapsing. The rooms smell like rotten B.O, the kind that has been there for months. I was honestly so desperate to get out of this place that I had contacted all 24-hour reception hotels in the Wollongong area to take me out. Please, if you have decent living standards then please reconsider booking this hostel as you will regret it.

Would never ever return to that hostel!

staff helpful, but the rest wasn't great at all. could get no sleep because there was party music during the whole night and the walls were so thin that you could hear everything coming from outside, relatively dirty, very old building (should be renovated!!), weird people, would never return to that place!!

Wollongong Backpackers Keiraleagh is a hundred-plus-year-old, heritage-listed building, that was originally a hospital. The kitchen, which has an original, arched doorway, was the chapel; the two outside dorms were the stable; and the workshop was the morgue! It's a laid-back place, and while "The Gong" is not on the main foreigner circuit, there's quite a bit of partying in the summer. It does cater for a few long-term residents, but not enough to change the nature of the place ... which is deliberately bohemian.

The hostel is set in a central part of the city and is easy enough to get to, and is close to public transport with the rail station less than two kilometers away; the beach and harbour are just over a kilometer; and the shopping streets are just two small blocks away. The Gong is a small city, but there's enough nightlife for most people in and around the centre. Travelers based in Sydney will find it an easy weekend away.

There's a big range of accommodation, but it's all budget priced, so the rooms are fairly basic, but all are clean. The bunks are comfortable but lack individual power points and lights. There's storage space in most rooms but not all are lockable, however, there are secure lockers in the main common lounge. The inside rooms are quite spacious; private and shared unisex bathrooms do the job but you might find the WC seat colour doesn't match the bowl ... wow! That's the nature of this hostel.

There's one small, indoor common area, which is both a kitchen and TV/DVD lounge with comfy large sofas. The kitchen facility is quite good, with plenty of utensils, and importantly, there's a large fridge and a small freezer. The only negative is the abundance of German cockroaches. Soft drinks and candy/sweets are sold from a vending machine at very moderate prices, while coffee and tea are provided free.

The outdoor area, which has music from a mainstream, easy-listening pop radio station is played most of the day, contains large Indonesian chairs and tables and is the main socialising area in all but the coldest months. There's a free BBQ out there that guests can use; the two cheapest dorms, two shared toilets and a shower facility (not the greatest), and a guest laundry (with free iron available) running off it. The paved area has a tarpaulin over it to protect from the summer heat, while the grassed area is under renovation, having been destroyed by a party.

This is a fun hostel, especially in summer when you can return from the beach and party on the premises with drinks bought from the supermarket rather than inflated prices of some hostels. If your style is a classy building, rules for everything, that is quiet after midnight, this is not the place for you, but if you are happy with basic economic facilities and a classic backpacker style, you should find this the place to be. 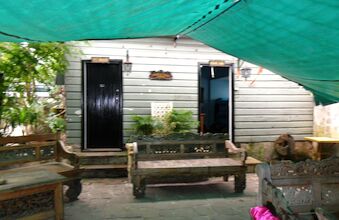 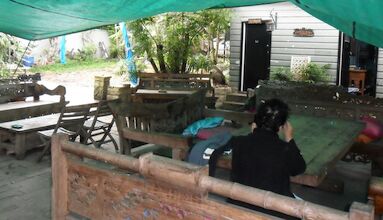 it was dirty and smelly and dark and cramp and it just felt creepy. there were ants all through the kitchen and it stunk.

What a great place to stay -- it's such fun, I think I'll go back again just for the sake of saying hello and will probably end up staying for a fortnight!

Great place to stay. Friendly, well priced, and allowed me to keep my bike securely inside. Cash only which is a bit of a pain.

Overall it was an amazing experience. The owners were so nice and welcoming and really made it feel like home. I was only there for a couple short days with my friends but we had a great time. It was raining the whole time so we spent a large part of our stay out on the back porch playing pool and other games that they had. Overall best hostel in Wollongong!

Enjoyed my stay, a very relaxed place to stay, good interaction with other guest, it's a great location very central to most things, looking forward to staying again, no complaints

Apart of unpleasant stuff, it was alright.

Such a beautiful hostel with super friendly staff. Both the rooms and the shared spaces are very clean and functional but also have a great vibe, and it's only a 5 minute walk from the beach or the city centre. We come back here every time we have an event down in Wollongong, such a great place to stay.

Upon arrival, it was not a welcome greeting at reception, nor a friendly departure. There isnt any free parking, theres paid parking close by, however depending on how many days/nights this gets very costly, very quickly. My room had a broken window, some of the showers water pressure was practically unusable. Was only there two nights and that was enough.

The hostel was great as far as the stay itself. However the male who answers the phone was rude and short. Tarnished what otherwise was a good stay.

Hey all, You can book this directly go there then you get it some cheaper. Very honest and humble person's live there. Best place in Wollongong.

Incredible private room with a beautiful bathroom with beautiful hand carved stone sinks from Bali. Big bright windows and the softest doona and pillows. This whole place is so calm and tranquil with excellent ammenities and chill out spots. Very short walk to all the shops and the beach. Thank you for my stay Legends!!!

The owners were so lovely and made me feel at home! Super clean, lovely courtyard, amazing location, and great price! Overall one of the best hostels I have stayed in

air con would be appreciated

If youre reading this I promise that you wont regret booking this Hostel. Its the best Ive ever been to. And the people are incredible as well. Its clean and well maintained. Ill definitely be visiting again soon. Oh and the location . Walking distance to everything.

Keiraleagh House is a lovely, friendly, relaxed Californian style Heritage House. Centrally located within walking distance from beautiful surfing beaches, restaurants, cafes, theatres, nightclubs and shopping centres. We accommodate travellers, backpackers, workers and students for a short or long term stay. Keiraleagh is clean, comfortable and affordable and located in a safe and friendly environment within easy reach of all major transport services. You can be assured of personal service, warm hospitality and a fun time when you stay with us.
Come and enjoy the laid back beach house atmosphere with alfresco kitchen and dining area, just 200 metres from the beach. The house is set in a beautiful tropical Balinese inspired garden with hints of incense adding to the gentle ambiance and good karma. Relax on the carved teak Balinese daybeds, have a backyard BBQ, socialise with our local and international guests or party at the many bars and night spots ,or the abundance of delectable cuisines in many cafes and restaurants. There is a coastal beach walk or bike track to explore the other great local beaches. There are many world class surf breaks within walking distance from the hostel and a local surf school for those who want to learn to surf. Visit the Buddhist temple ,which is the largest in the southern hemisphere. Or just chill out!!
Group Bookings of 7 or more must contact management before booking.
PLEASE add your phone number and time of arrival to your booking , so that we can contact you.

There are single, twin and double rooms, or 4 or 6 share dorm rooms.

PLEASE NOTE: NO CREDIT CARDS-CASH ONLY
We do not accept group bookings of more than 7 persons on this site. You will have to contact the hostel to inquire about group booking procedure.
Although we endeavour to place dormitory bookings in the same room, it may not always be possible during busy periods.
Payment is on checkin.
A $20 key deposit is required on check in.
NO CREDIT CARDS or EFTPOS
Checkins from 12 noon to 9 pm. On request outside these hours.
Parking is dependent on availability. Street parking is metered, but no charge between 4.30pm and 8.30am and on weekends.

• The hostel is located about 3 blocks or 10-15 mins walk from Wollongong central railway station. The Wollongong Bus terminal is at the railway station.
• FROM SYDNEY AIRPORT: There is a bus or a train service from the airport. IF you are catching the train, get off at Wollongong Station.There is a free city bus service which will take you on a circuit from the city beaches to the university.
• CAR TRAVELLERS- There is on street parking outside the Hostel. During the day there are parking meters operating, but it is free to park in the street over night.

Keiraleagh Backpackers Wollongong is listed on the following booking sites:

backpack.net.au
Phone Number: 61 2 42286765
To add or correct information for this listing, please use the Listing Correction Form.

See all hostels in Wollongong

See all 1 cheap places to stay in Wollongong