7.6
2 Reviews
We compare all hostel prices in Rome for you. So you save money and time!

On the bright side, there are more hostels in Rome...

your hostels in Rome

How is Hostel Andrew rated on booking websites?

All one can ask of a hostel

Clean, quiet, handy lockers under the beds (bring your own lock), great location, close to bars, shops and public transport.

Hostel Andrew is conveniently located near Termini Station, making it a great base for exploring Rome. It's very small, and not very social, but its location, cleanliness, and the kitchen make it a good hostel choice.

The hostel is located just minutes from Termini Station, making it a convenient place for accessing the metro or getting to and from the airport. Exit Termini to Via Marsala and head down Via Marghera (it should be the street directly in front of you as you exit the station). Go a few blocks and turn right on Via Palestro. The hostel will be labeled Hotel Corallo and Hostel Yello, depending on the angle from which you look at it. The neighborhood isn't particularly exciting, but it is definitely a good base for exploring the rest of Rome.

This is a very small hostel with only two rooms -- one private, three-bed dorm, and one mixed, six-bed dorm. The three-bed private is made up of single beds; the dorm is all bunk beds. The whole hostel locks securely, and the private room has a door lock, but the mixed dorm does not; however, the mixed dorm does have very secure lockers beneath the beds, but no locks are provided (bring your own). The beds are incredibly squeaky, which can wake you up in the night, but they are relatively comfortable for hostel beds, and the linen is clean and keeps you warm.

The bathroom has a pretty strange setup -- it's long, but narrow, resulting in a teeny-tiny shower (maybe two-by-two or three-by-three) that is practically on top of the toilet. It's surrounded by a curtain rather than a stall, so the floor is pretty much flooded whenever someone showers. But, if you don't mind limited space, the water pressure and heat are both decent and everything is kept clean.

There is one common space -- the kitchen, which is very small and contains TV, table with chairs, and a couch. It has a stove and oven and refrigerator, but funnily enough, no microwave. This area is very small, but people still try to socialize in there, though it just isn't very convenient. Since the hostel is so small, it's pretty subdued. People generally just use it as a place to sleep and eat, since the lack of a real common room doesn't make it a great place to socialize. But people are usually up for a conversation -- especially if you're both in the tiny kitchen.

This hostel isn't outstanding, but it has a great price, is in a safe neighborhood, close to the metro, and (unlike many hostels in the area) it has a kitchen. They will store your luggage downstairs if necessary. So, overall, it's a pretty solid choice for Rome. 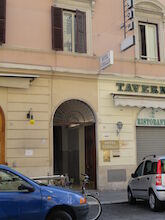 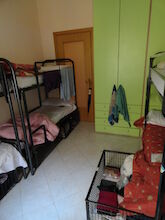 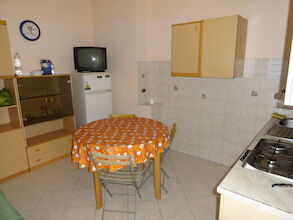 This Hostel is simply a place to sleep at night, not even that comfortably. the bathroom is a joke if you plan to shower, the curtain that divide the three by three foot space for a shower from the rest of the bathroom might as well not be there, and they don't rent towels so come prepare. there is however a lounge area with a TV so you can relax outside of your room and there are lockers in the hall for your use if you have your own lock. no breakfast though, and I think it is really three hostels in one, including yellow hostel. my honest recommendation is to try somewhere else first. but it will do just for one nights passing, if that is all you need.

If it were possible to describe our hostel with only three words, however impossible that may seem, it would be as follows: Calm, Pleasant, but above all, Clean.
Hostel Andrew, was born from the idea of the young owners of the Hotel Corallo (Andrea and Giuseppe), for the purpose of offering reasonable accommodations in a dormitory-style setting.
Each room consists of 4 and 6 bed places. The hostel is situated on the third floor of an historic building. The reception area is reached by taking the second elevator in the building to the 6th floor.

The Hostel Andrew offers its customers the following amenities:
. Free maps of Rome
. Satellite T.V in each room
. Free kitchen
. Free blankets and sheets
. Lockers
. No Curfew or Lock-out
. Free hot shower 24h
We can book tourist excursions in Rome or to other Italian cities.

5 minutes on foot from the Main Train Station "Termini", and 15 minutes walking distance to the Colosseum and all the old town centre of the City.

See all hostels in Rome

On the bright side, there are more hostels in Rome...