7.9
26 Reviews
We compare all hostel prices in Madrid for you. So you save money and time!

On the bright side, there are more hostels in Madrid...

your hostels in Madrid

How is La Posada de Huertas rated on booking websites?

La Posada de Huertas is a big hostal with tiny common spaces -- that's the best way to describe it. The service is very nice, though -- you get invited to join a city tour in the morning with all the other guests and to come and party in the evening. To party, you get grouped with another hostel in order for the group to be bigger and you get shown around at the local pubs to end the night in Madrid's biggest disco. The ambiance feels a bit cold during check-in hours, but as you approach the evening, everyone opens up and it feels a lot more alive.

Located in the city centre, it has easy access by metro as there is a metro station two streets (or five minutes' walk) from the hostel, as well as easy access by car and walking. Every big monument is located at less than a ten-minute walk and there is plenty to do around the hostel. When you check out, you have the chance to leave your luggage at the hostel's baggage garage, meaning you can spend more time visiting the city centre with ease even after checking out.

You'll get a basic dorm room with everything you need -- a personal electricity plug, plus a big locker that allows you to store plenty of stuff and keep it safe. There's a comfy and clean bed but with a bad pillow -- we have to fold it two times in order for it to be big enough. The bathroom is the most underwhelming part; on our floor, there is a single bathroom/shower, which gets flooded anytime someone takes a shower, so you can expect a nice amount of water on the floor in the bathroom. It does have all the basic necessities -- a hair dryer, electric shaver plug, paper towels to dry your hands, and a soap dispenser.

As you enter, you have the lobby and a TV, which is on and off and the remote is available for everyone; here, you have a few couches where you can sit and talk to the people who come in. Then you have the kitchen, which is a bit tiny if you keep in mind all the people that the hostel can hold. It works if everyone takes turns to have breakfast, but if everyone decides to come in at the same time you'll have a problem. The breakfast is pretty basic, you have everything you need -- coffee, orange juice, milk, cereals, and toast -- but it feels a tiny bit underwhelming. Next to the kitchen, you have the computer room/study, there is plenty of space for anyone to get comfy and get his computer out. There are three computers available with internet access for anyone to use, but as previously mentioned, there is plenty of space to get your own computer out in case that all the computers are taken.

It's not the best of hostels that you can find in the area, but it's good enough to spend a few nights (if you are staying any longer than two nights you should bring your own pillow). The accessibility makes up for the tiny common spaces, and as you are in the city centre there is no need to stay in the hostel, since everything you can imagine is at walking distance and even the airport is only at thirty minutes if you take the metro. All in all, this is a decent hostel in middle of a living city. 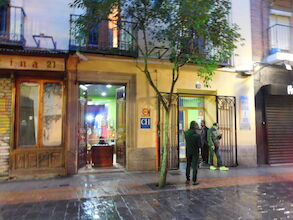 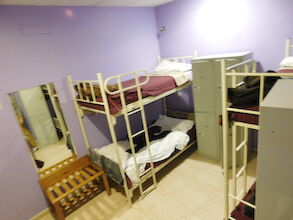 Well what would you expect -- Its a hostel so you have beds that are more or less comfortable, Kitchen, sh*tty breakfast, friendly helpful staff and overall a good atmosphere and generally clean or with the possibility to clean yourself if you are not happy with something. I would like to point out that the locker system worked perfectly (everybody has a locker which can be opened and closed with the personalised electronic key). It's a great location even though at night quiet noisy. So therefore I recommend you this hostel if you look for a cheap place with the typical hostel situations. If you are willing and expecting a hostel you will be just fine there -- just dont put your expectations too high.

there was nothing special about the place, but it was very decent. nice large rooms, decent location, friendly staff, and nice kitchen, just there is no oven. all in all i would stay here again, but i might also forget about it because it was not stand out ish. just a nice place to sleep.

Nice, clean and with perfect location. It was really warm and cosy inside, with clean rooms, clean bathrooms and a nice kitchen. The stuff wasn't as friendly as usually in the hostels (they were a bit too "official" for hostel workers). Unfortunately the wi-fi is available only in the common room. Except of this problem -- everything else is really nice there.

Have seen better ones ...

Not exactly beautiful, cosy, or homey. Quite anonymous, wifi only in the lobby, average breakfast, average shower facilities. Perfect location at c/huertas though.

The staff is excellent and it's located very near the main attractions of the city -- it is more or less at walking distance from Atocha train station. and the breakfast is included and you can eat all you like, which can be a bit of a problem at times, because the food will end quite quickly, and it's quite messy around. We got a double private room, which really had a bed and a bunk crammed in a little blue box almost a cell-like place. And we also had a private double, which in both cases had very little space and the beds where a bit strange. The place is really noisy, people go up and down stairs all time, and since they are wooden stairs I bet you can get the picture of the amount of noise they make. The shower rooms are really ok. Overall you should go if you want to save a little coins and still have a breakfast and a quite good location, but I'm not sure if you'll get to sleep too well.

Our location makes us the ideal starting point for short walks to many of Madrid's most interesting sites: The Museum Triangle ( Prado, Reina Sofia and the Thyssen) the Royal Palace and the Puerta del Sol. We are also within easy reach of churches, monuments, shopping, restaurants, theaters and many different clubs and discos.

Our hostel offers the following:

- Dormitory rooms with lockers and linen included
- Free use of kitchen facilities
- Storage room after check out
- 24hr reception, no curfew
- Living room with TV and internet access
- English speaking staff
- Local tourist information
- Air conditioning in all the rooms

See all 68 hostels in Madrid

On the bright side, there are more hostels in Madrid...